It is reported that the hackers behind the Twitter attack have now claimed responsibility.

‘Scriptkiddies’ took control of @foxnewspolitics - a bona fide account of the US news service with 33,000 people following it - at the beginning of 4 July, which is a public holiday in the US for Independence Day.

People following Fox’s politics feed account would have seen the shocking hoax posts that claimed the President was dead appearing from 2.43am EDT (Eastern Daylight Time), with hundreds of them forwarding this on to their followers. 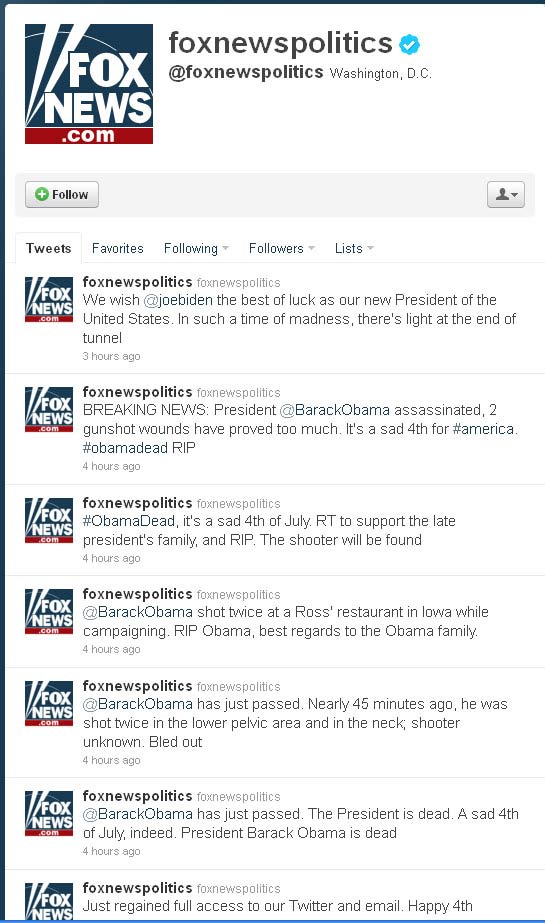 The hackers then continued: “Barack Obama has just passed. The President is dead. A sad 4th of July, indeed. President Barack Obama is dead.”

Obama’s fake death is then explained by the hackers in more detail, including when, where and how he allegedly died.
The seventh and final tweet wished vice president Joe Biden the best of luck as the country’s new president.
At the time of writing the tweets about the US President remain on the feed. Fox News was unavailable for comment in time for publication.
Posting Source: http://uk.news.yahoo.com/hackers-tweet-%E2%80%98obama-assassinated%E2%80%99-on-fox-news-account.html
Posted by Anonymous at 2:11 AM