By Gaby Leslie | Yahoo! News – Tue, Jul 5, 2011
A single, rogue pink flamingo managed to shut down an entire airport runway in the UK this week.

Officials had no choice but to close one of Manchester Airport’s two runways early Monday morning as workers attempted to catch the stray flamingo, nicknamed Ringo.

It is unclear where the mystery bird came from, as no wildlife sanctuaries in the area have reported a missing bird.

“In over 20 years at the airport this is without doubt one of the most unusual things I’ve seen land here,” said Tim McDermott, Manchester Airport’s operations director. 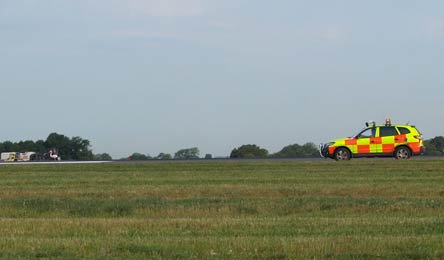 They initially managed to frighten it from the airfield using a 4x4 vehicle blasting loud music and setting off flares.

But to the dismay of airport staff, the bird returned at 8am the following day, seeing the wild flamingo chase begin again using the same bird-scaring tactics. Ringo finally flew away around 12.30pm.

One passenger tweeted on 4 July: “Delayed at Manchester Airport due to a flamingo on the runway...” 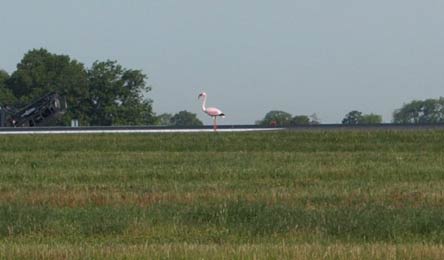 However, the airport said the ordeal did not cause any delays, cancellations or disruptions to passengers.

“Birds are, unfortunately a hazard within an airport environment, so I’m pleased we were able to persuade the bird to leave the airfield quickly,” Manchester Airport’s McDermott said in a statement.

It’s not the first odd airport invasion to close a runway, just last week New York’s JFK Airport had to stop traffic on a runway for 15 minutes as migrating turtles crossed the tarmac.
Posting Source: http://uk.news.yahoo.com/wild-flamingo-chase-shuts-airport-runway.html
Posted by Anonymous at 3:37 AM