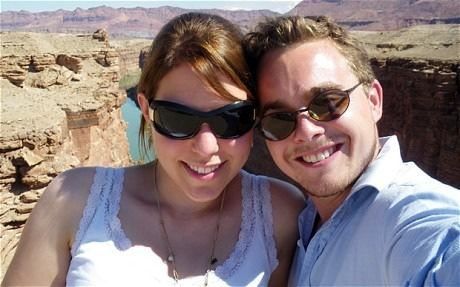 Heidi Withers and Freddie Bourne in happier days, before the great mother-in-law email debacle. (photo courtesy of The Telegraph)
New term: mom-zilla. We know all about temporary bridal insanity, and theunderreported groom version, but in some families, it’s the parentswho are seized by irrational wedding meltdowns.

Last month, 60-year-old British florist and total mom-zilla, Carolyn Bourne attacked. After her stepson’s bride-to-be, Heidi Withers, was a guest in her house she had a thing or two to teach herbefore she entered the Bourne family.

So Bourne sent the 29-year-old a soul-crushing email. The subject line: “Your lack of manners.” The bullet points for the bride, in paraphrase: her wedding is going to be tacky, she’s too picky of an eater, her sense of humor sucks, and her stepson is making a dreadful choice in marrying her. And one more thing: her out-of-work parents are cheap.

When Withers received the email (Bourne sent it three times to be sure) she did what anyone would do: she forwarded it to a few friends to share in the shock. What was the alternative —respond with a 'frowny' face? But instead of simply offering advice, some anonymous friend got pro-active and forwarded Bourne’s e-attack, launching a viral sensation in a matter of hours. Now everyone in the Western Hemisphere has laid eyes on Bourne’s email.

In a way, it’s the ultimate revenge on a mother-in-law who needed to be put in her place after such power-mongering. But it’s not going to make for smooth wedding. Bourne has been labeled the mother-in-law from hell by media outlets and Withers’ father Alan has fueled the fire  by publicly calling Bourne “Miss fancy pants." Now parents on both sides of the couple are fueding and nobody's manners are in check. Suggestion for Heidi and Freddie, her groom: elope.

Bourne has told London's Telegraph she still plans to attend the wedding, but will maintain a "dignified silence." She may know about English etiquette but she’s clueless about the cardinal rule of the Internet: never send an email you don’t want the world to see.  You almost have to feel bad for the lady, mom-zilla or not. That is, until you read the actual email she sent Withers. Here’s an excerpt:

from: Carolyn Bourne
to: heidi withers
subject: your lack of manners

Here are a few examples of your lack of manners:

When you are a guest in another's house, you do not declare what you will and will not eat - unless you are positively allergic to something.

You do not remark that you do not have enough food.

You do not start before everyone else.

You do not take additional helpings without being invited to by your host.

When a guest in another's house, you do not lie in bed until late morning in households that rise early - you fall in line with house norms.

You should never ever insult the family you are about to join at any time and most definitely not in public. I gather you passed this off as a joke but the reaction in the pub was one of shock, not laughter.

You regularly draw attention to yourself. Perhaps you should ask yourself why. No one gets married in a castle unless they own it. It is brash, celebrity style behaviour.

I understand your parents are unable to contribute very much towards the cost of your wedding. (There is nothing wrong with that except that convention is such that one might presume they would have saved over the years for their daughters' marriages.)

If this is the case, it would be most ladylike and gracious to lower your sights and have a modest wedding as befits both your incomes.

One could be accused of thinking that Heidi Withers must be patting herself on the back for having caught a most eligible young man. I pity Freddie.

Ouch. There's no denying it's harsh, but if you've ever been in the line of fire in a wedding party, you knowmarriage anxieties strike darkness in the hearts of man. What do you think: Is this mom's email forgivable?
Posting Source: http://shine.yahoo.com/channel/sex/mother-in-law-sends-worst-email-ever-to-bride-forgivable-2504517/
Posted by Anonymous at 2:14 AM