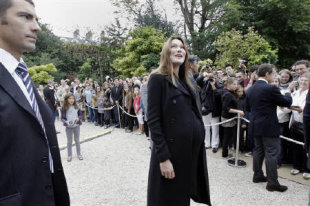 PARIS (Reuters) - France's first lady Carla Bruni is expected to give birth in the coming days, keeping French media on tenterhooks before an event that could offer President Nicolas Sarkozy a welcome respite from non-stop political headwinds.

France's President Nicolas Sarkozy (R) signs autographs as his wife Carla Bruni-Sarkozy looks at visitors who …
The birth of a baby could help soften Sarkozy's image with voters less than seven months before a presidential election he risks losing to Socialist frontrunner Francois Hollande, though pollsters say any boost would likely be brief.
Photogallery - Carla Bruni-Sarkozy's India visit
Bruni's due date is a closely guarded secret, but is widely believed to be a matter of days away, and media coverage surrounding her pregnancy has grown to fever pitch in what has become a national countdown to her delivery.
Police have set up a discrete security cordon around the private clinic in western Paris where Bruni is due to give birth, and a galley of TV cameras stand guard around the clock.
"Carla Bruni -- the baby due soon!" trumpeted a headline this week on news website lepost.fr, which focuses on politics and people, echoing cover stories in weekly magazines.
The excitement stems partly from the novelty of the presidential couple having a baby in office, in a country where the head of state's private life was long kept completely out of view -- especially where children were concerned.
Many in France found Sarkozy's high-speed courtship of Bruni, a singer-songwriter and former model, distasteful coming so quickly after his divorce from his second wife, Cecilia, but Sarkozy has been at pains to be more discreet and presidential over the pregnancy.


France's First Lady Carla Bruni-Sarkozy walks to the beach at the Fort de Bregancon in Bormes les Mimosas July …
Earlier this year, photographs of Sarkozy relaxing on a beach with the heavily pregnant yet glowing Bruni showed a tender, sympathetic side to the conservative president. His image will be key as he tries to woo back an electorate fed up at economic gloom and disillusioned with a leader many see as impulsive and brash, despite his leadership on international issues such as the crisis in Libya.

"Today the dissatisfaction around Nicolas Sarkozy has reached such a level that the pregnancy and birth will be secondary in terms of public opinion -- even if the pregnancy does fascinate France," said Francois Miquet-Marty, an analyst at the Viavoice polling agency.
Before her low-key 2008 marriage to Sarkozy, Bruni was linked to a number of celebrities. She also has a child from a previous marriage to French academic Raphael Enthoven.
A hospital source told Reuters that the baby, which French media is betting will be male, was due to be born on Oct. 28.
In her most recent interview, Bruni told the BBC the fact she was having a child was of minimal interest for the French.
But that has not stopped a rumour mill, spurred on by a lack of news from Sarkozy's office, from producing dozens of false birth announcements on Twitter and reams of speculation about what the child might be named and whether there could be twins.
(Reporting By Nicholas Vinocur; Additional reporting by Lucien Libert and Emmanuel Pham Nhu Editing by Maria Golovnina)