Provided by:
Every so often, a hotel comes along that is both stylish and comfortable, close to the action and affordable. Here are 10 properties that make the cut this year.
By BudgetTravel 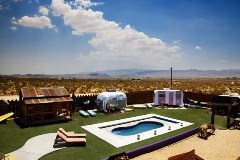 Hicksville Trailer Palace
Courtesy Hicksville Trailer Palace
More from BudgetTravel.com
More from Yahoo! Travel
We scoured the globe to find the best new hotels out there. Making our list is harder than you think! Each of these independent properties has to meet strict criteria to even be considered: they must have a unique story; their design sense must speak to the local culture instead of being generic and corporate; and they must (no exceptions!) be available for under $150 per night.


Hicksville Trailer Palace owner Morgan Higby Night isn’t the first creative type to find inspiration in the rugged, lunar landscape of Joshua Tree National Park (see also: Gram Parsons, U2). But the Los Angeles–based writer and producer (Shortbus, Talking About Sex) has certainly taken his artists’ retreat there to an audaciously kitschy level. “I was already going out to Joshua Tree two to three days a week to write my latest screenplay,” Higby Night says. “It made me think that maybe other artists in L.A. also needed a place to get away to work.”

Higby Night installed 10 vintage trailers, a solar-heated saltwater pool, and an archery and BB gun range on his two-acre desert plot last April. Each unit has a distinct design scheme and amenities: a jukebox filled with punk tunes, a TV stocked with horror (and only horror) movies, and bunk beds that, for an extra $50 a day, can be tucked away to make room for a film editing suite. And guests don’t have to worry about curious day-trippers traipsing the grounds: Directions are only given out to folks with confirmed reservations. hicksville.com, from $75. 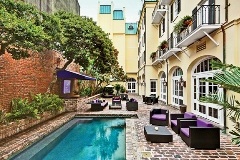 
Like many French Quarter spots, the Hotel Le Marais, steps away from Bourbon Street, greets guests with plenty of flash: The lobby is all bright colors, mirrored tiles, and party music. But enter one of its 64 renovated guest rooms, and the tone shifts. The mostly neutral decor subtly references the city—eggplant throw pillows, photos of Louisiana landscapes—without playing to clichés. Some rooms even have wrought-iron balconies overlooking the internal brick courtyard (and its heated saltwater plunge pool) lit with both old-fashioned gas lamps and neon purple lights. hotellemarais.com, from $110. 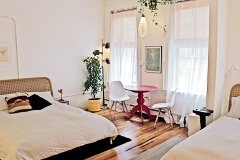 
Imagine having a looped-in, laid-back New York friend who simply hands over the keys to his apartment. That’s the appeal of 3B, a four-room B&B in downtown Brooklyn opened this year by a creative collective of entrepreneurs who happen to live downstairs. The three private rooms and one 4-bed dormitory share an approachable, subtly retro aesthetic—an Eames-style rocker here, a wicker headboard there—and 3B’s position on the top floor of a corner building means the whole place gets great light. And while the communal spirit also extends to the bathrooms—there are two, shared among the rooms—3B’s private two-bedroom suite, at $160 a night, could still be the juiciest family value in the Big Apple. 3bbrooklyn.com, doubles from $125. 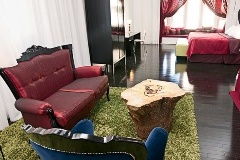 
Don’t be fooled by the facade of the Hôtel Chez Swann. The outside may be classic Tudor, but inside you’ll find whimsical design touches that have become a signature of Montreal’s boutique-hotel scene. The vibe of Chez Swann is high-minded (the moniker is an allusion to Proust; the art is decidedly contemporary), and the 23 rooms have a dramatic boudoir look: Venetian chairs covered in jewel-tone velvet, heavy burgundy draperies, upholstered headboards. The downtown location puts you close to the nightlife and shopping along rue Ste.-Catherine. Plus, it’s just a short metro ride to Old Montreal. hotelchezswann.com, from $140. 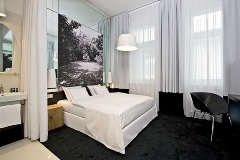 
Design hotels are a dime a dozen in Berlin, but most still charge a premium for that polish. Newcomer Sir F.K. Savigny, in the west Berlin Charlottenburg neighborhood, has all the same trappings as the swankiest spots (an aristocratic name, oversize black-and-white photos, a stylish wine bar), but at a bargain price. Service is key here—there’s a 24-hour concierge, and pets are welcome. Even families will find something to love: The 44-room hotel is just a 10-minute walk from the Berlin Zoological Garden, opened in 1844, and a mile from the 509-acre Tiergarten, one of the city’s largest parks, laced with 25 miles of walking trails. hotel-sirsavigny.de, from $127. 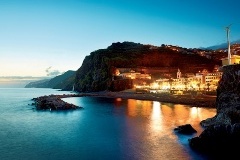 
Set on a beach overlooking the Atlantic in the fishing village of Ponta do Sol, the Hotel da Vila always seems bathed in sunlight. There’s a good reason for that: The town is thought to sit on the single sunniest point on the island of Madeira, 527 miles off the Portuguese coast. Inside the hotel’s 16 bright white rooms, Lisbon designer Duarte Caldeira has outfitted the space with a mix of rustic and modern materials: traditional blue azulejo tiles, wood and stone reclaimed from the surrounding forests, and transparent plastic headboard cushions stuffed with wheat straw. The year-old building is a sister property to the luxe Estalagem da Ponta do Sol, a four-minute walk away. The two hotels share a clean, white aesthetic, and as a da Vila guest, you still get full use of the Estalagem’s infinity pool, gym, sauna, and spa—without having to pay the same hefty price tag. pontadosol.com, from $71. 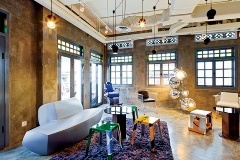 
The 29-room Wanderlust Hotel in Singapore’s Little India served as a schoolhouse in the 1920s, and it can still teach you a thing or two—this time, about the cutting edge of interior design. Each of the four floors has been handed over to a different local design firm, yielding a slew of wildly themed spaces. The second-floor rooms each focus on a color related to a pop song: The all-yellow room, for example, has a customized yellow submarine neon sign. Other rooms take inspiration from science fiction (a cubist rocket sculpture with stuffed aliens) and tree houses (a ceiling covered with fake foliage). You might not know whether to crash in your room or treat it like a crash course in contemporary art. wanderlusthotel.com, from $150. 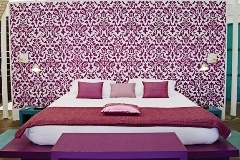 
When India’s maharajas went on turn-of-the-century hunting expeditions, they did it in style, erecting opulent safari tents at every stop. That’s the inspiration behind Amarya Shamiyana, a four-room encampment set in a grove of coconut palms on north Goa’s tranquil Ashvem Beach. Open and airy, the 700-square-foot tents have 20-foot ceilings and sit atop cool concrete footings. But this hardly qualifies as roughing it: French owners Alexandre Lieury and Mathieu Chanard have supplied each tent with air-conditioning, Wi-Fi, and en suite rain showers surrounded by wood decking. There’s an outdoor lounge with low sofas and metallic beanbag chairs, and each tent is splashed with a different color: The damask murals behind the beds are pink in one, blue in another. For the most secluded option, go for the gold. amaryagroup.com/amaryashamiyana.php, from $122. Note: The hotel is closed during the monsoon season, May 1–Nov. 15. 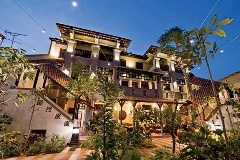 
With its Indian, Chinese, and ethnic Malay influences, Malaysia sits at the cultural crossroads of Southeast Asia. So it’s no wonder that the Hotel Penaga draws so heavily on this rich confluence. Architect Hijjas Kasturi and his environmentalist wife, Angela, spent three years renovating the three art deco buildings that constitute the hotel, using found materials from across the region in the 45 rooms. Granite slabs in the garden came to the country as ballast on early 20th-century Chinese trading ships. Flooring incorporates Indonesian pressed tiles. Rugs are either Chinese cowhide, Indian sisal, Turkish patchwork kilims, or bamboo mats from eastern Malaysia. And much of the timber used was salvaged from demolished colonial buildings on the peninsula. The Kasturis also run an artist retreat near Kuala Lumpur, so you can expect to see original pieces created by both well-known and emerging artists hanging all over the Penaga’s walls. hotelpenaga.com, from $134. 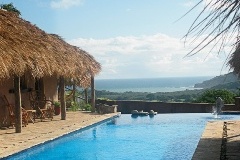 
You don’t have to be a surfer to dig Casa de Olas, but it helps. Set atop a cliff overlooking the fishing village of San Juan del Sur, the hotel, whose name aptly translates to “house of waves,” affords Pacific Ocean views, free shuttle service to local beaches, and proximity to some of Nicaragua’s best breaks. Opened this year by Australian expats Fred and Carla Batty, the seven-room spot (which also has a dorm that sleeps eight) throws in a free breakfast—pancakes, eggs, bacon, and tropical fruit grown on-site—to fuel your surfing adventures. Need a rest from the waves? Grab a cocktail made from local, award-winning Flor de Caña rum at the thatch-roof Freddy’s Bar and sip it by the 40-foot-long infinity pool. Or you could always just hang out with Buzz, the casa’s resident monkey. casa-de-olas.com, dorms $20, doubles $69.

See more of the Best New Affordable Hotels
Posting source: http://travel.yahoo.com/p-interests-40782814
Posted by skalahasthi05 at 1:41 AM