A man is attempting to change travel history after unveiling his own updated version of the iconicLondon Underground map.

British designer Mark Noad has redesigned Harry Beck’s 1931 classic version to show the routes and distances between all London stations in a more geographically accurate way.

According to Mr Noad, the map has nothing to do with Transport for London (TFL) but he has designed it in a way that still retains the clarity of the original.

Explaining some of the changes on his project website, the major alterations include changing Beck’s 45-degree angles into 30- and 60-degree ones to shorten the extremities of the lines to make it more compact. 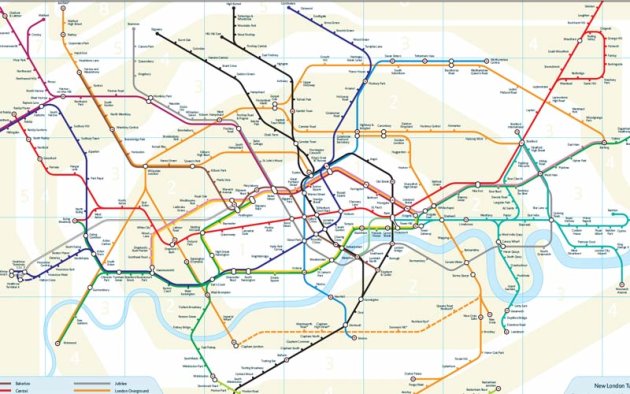 (Credit: Mark Noad)
Mr Noad is reported as saying: “They form the basis for a major criticism of the diagram that it bears little or no relation to London at street level. This distorts the actual physical locations of some stations, leading to confusion when selecting a route to take, or whether it is quicker to walk between stations.”

The creator of the map also stated that there are twice as many lines today than when Beck designed his map with the London Overground line and DLR as examples of recent additions to this classic design.

He posted on his blog last week: “This is not intended as a replacement to the official version, it is simply another way to look at it. We all think differently so you can decide which fits best with your way of thinking. For the first time there is a usable alternative.”

He is now said to be planning to take the new map viral by launching a new app for smart phones and develop a fully functional Website.

Speaking about the current Tube map, a TFL spokesman told Yahoo! News today: “The Tube map is constantly evolving as new stations or extensions are added.”

“This much loved design is clear, simple and easy to read. Its aim is to help customers travel across the capital on the Tube and is not supposed to be used as a street guide.”

Posting Source: http://uk.news.yahoo.com/london-tube-map-gets-makeover-by-designer.html
Posted by Anonymous at 3:00 AM