Meet the youngest member of Will and Kate’s welcome party

When Prince William and Kate Middleton arrived in Ottawa Thursday, they were treated to more than just a typical welcoming party of politicians and local dignitaries. 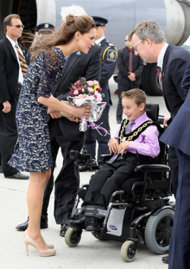 Waiting on the airport runway was a dapper young man in a purple dress-shirt who happily handed Kate a bouquet of flowers while she leaned in to chat with him in his wheelchair.
His name is Kellen Schleyer, a nine-year-old from the Ottawa area. He's a fourth-grader from St. Jerome Catholic School, where his classmates couldn't believe he was going to meet the royal couple.

"Everybody was like: 'Are you really going to meet them?' and I say 'Yes! Yes! Yes!" Kellen told local Ottawa radio station CFRA.
He was selected by Ottawa Mayor Jim Watson as one of two children who would "represent the future" of the Ottawa community at the historic event. Mayor Watson met Kellen at the opening of a local community centre, and asked him if he'd be willing to join him when he met the couple on June 30.
"He's a very bright young boy and very active in his community, he's in the choir and plays sports," said Watson to the Ottawa Sun. "I thought he would get a kick out of meeting (them)."
Kellen is restricted to a wheelchair for much of his mobility due to his cerebral palsy, but that doesn't stop him from remaining upbeat and active. When not greeting royals, he switches from wheelchair to bike for his commute to school and has spoken on a children's program about what children with disabilities can do.
Adding royal greeter to the list of things Kellen can do has the boy very excited. In a radio interview with CBC Ottawa, he explained how happy he was to be chosen, and was especially thrilled to meet Princess Catherine. Kellen's only worry was figuring out what to call them, debating if "your greatesty" would do.
As if meeting Will and Kate wasn't special enough, Kellen lent his own special touch to the occasion - he picked out the flowers for Kate himself, selecting mostly purple blossoms, his favourite colour.
Posting Source: http://ca.news.yahoo.com/blogs/dailybrew/meet-youngest-member-kate-welcome-party-213126354.html
Posted by Anonymous at 3:59 AM