Are you an overly defensive dater? 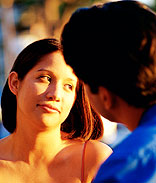 Ah, if only we all had a mirror to see ourselves when we’re interacting with our dates. Would that tell a story! But is it the same story or a different version that our dates experience?

“I thought I was poker-faced,” says Washingtonian Rachel, 32. “But the last guy I dated asked me how often I see my family, then claimed I shot him a haughty ‘mind your own business’ look. He said he was just asking a simple question. The truth is, I am not close with my family, but thought I hid it pretty well. I guess not.”

Without realizing it, you can come off as overly defensive to your dates. All it takes is one inquiring mind asking about aspects of your life that should be acceptable topics of conversation. Then, what should be an innocuous comment instead sets you off and you bristle for reasons you may not even understand at the time. If you think this might be you, know that the first step in changing such counterproductive behavior is self-awareness. Think back over some of your recent dates. Do any of these common defensive reactions sound familiar?
The “uncomfortable topic” cringe
Are you like Rachel? In other words, does a question about your family make your blood boil? Or does the mere mention of an ex send you into battle mode, ready to defend your relationship behavior and shoot down your date’s? How about that bad day at the office? Trust that if you’re feeling uncomfortable, you’re probably conveyingthat feeling to your date, too. So make sure you know which topics make you cringe beforehand; that awareness allows you to mentally prepare and answer such questions gracefully with a pre-planned response.

Fearful reactions to both positives and negatives
Defensive traits can really develop from being afraid of, well, anything — rejection, getting hurt, not living up to someone’s expectations, or doing something wrong. Sometimes, it’s not fear of something hurtful, but fear of something good that triggers your defensiveness. Fear of intimacy — a signal you and your date might be moving to a deeper (read: riskier) level in your budding relationship — can make you want to take control of the conversation and shut him or her down.

The “critical assumption” trap
“My parents were very disparaging,” says New Yorker Lisa, 36. “When I was growing up, I felt I could never do anything right.” Lisa’s hot-button topics concern eating, exercise, and work habits. So when her dates innocuously mentioned any of these issues, she overreacted until she realized what was happening and learned to manage her responses better. It’s key to realize those areas where you’re prone to negatively misinterpret a comment from someone who doesn’t know you very well and wrongly assume your date is being judgmental.

Avoiding the truth
“I was chronically late to all my dates with my boyfriend, Matt,” says Marylander Jean, 32. “I usually showed up stressed and blamed either traffic or work. After the fifth time, he asked me to just admit that I was late because I was late. I got mad at him for not understanding, but later realized he was right.” When you deny responsibility or make excuses, your date might assume you’re either missing the truth gene or lacking self-awareness. Neither impression helps nurture a new romantic relationship.

Fight-or-flight syndrome
“My date challenged me about my political stances, and I felt attacked,” says Californian Melanie, 37. “He thought we were having a friendly debate, but I wanted to either argue or walk out.” Melanie’s reaction is a common one for people who feel like they’re being confronted. But overly defensive daters jump to the wrong conclusions more than paratroopers hop out of airplanes, so make sure you’re clear about the difference between a real vs. perceived attack.

Eight tips to help change your behavior
For the sake of your dating success, it’s important to get a handle on overly defensive reactions, especially if you hope to build a successful, long-term relationship. In his book, The Seven Principles for Making Marriage Work, John Gottman, Ph.D. calls defensive behavior one of the “Four Horsemen of the Apocalypse.” It’s a major cause of relationship distress and can nip your promising dinner date in the bud before you get to dessert, so don’t let that happen! Instead, follow these eight steps for recognizing the warning signs and adjust your “defensive date behavior” now:

1. Understand your personal triggers. Like Rachel, learn what things triggers your defensive reactions. Only you know the issues that will trip your switch; be prepared.

2. Practice your reactions. Once you know what triggers you, practice your response to a potential hot-button question or comment from a date. Breathe; visualize responding easily and without stress.

3. Slow down your response time. When your date says or does something that’s likely to set you off, slow down and avoid replying too quickly if you feel uncomfortable or unsure of yourself. Take a minute to think before you speak.

4. Monitor your defensive behaviors. Keep track of how often you feel defensive during a date and how you typically react. Some people keep a journal to record what was said, how they felt, and how they physically reacted to a defensive dating interaction.

5. Get feedback from a trusted source. Ask your friends to give you feedback on any defensive reactions they’ve noticed in you. What do you typically say? What does your body language indicate? You and your date may not know each other well enough to make such an assessment correctly, so request this information from those who know you best.

6. Pay attention to the rules of body language 101. If you can, try to avoid these visible, non-verbal signs that tell your date you’re definitely feeling defensive:7. Explore the other person’s perspective. When a date sends you into defensive behavior overdrive, don’t automatically defend yourself or try to attack back. Instead, ask questions to understand where your date’s coming from, assess his or her true intentions, and turn your solo defensive moment into a shared bonding experience.

8. Get help if you need it. If you find yourself completely stuck in “overly defensive dater” mode on a particular issue and are unable to control your behavior, consider spending time with a counselor to get at the root of the issue so you can better manage your response when you’re getting to know someone new.
Posting Source: http://yahoo.match.com/cp.aspx?cpp=/cppp/yahoo/article.html&articleid=12233&TrackingID=526103&BannerID=763019
Posted by Anonymous at 12:10 AM