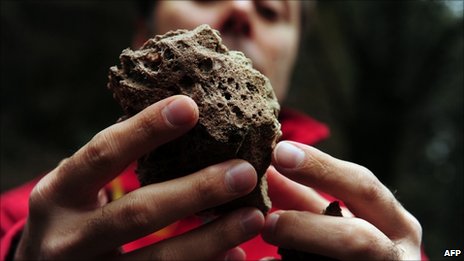 Ash, grit and pumice stones have fallen on the region since the eruption


Chilean authorities have expanded the evacuation area around a volcano range that continues to spew out ash.
Officials say there is a danger of flash floods caused by rivers being silted up with volcanic grit.
The Puyehue-Cordon-Caulle volcano range, about 800km (500 miles) south of the capital, Santiago, began erupting at the weekend.
In neighbouring Argentina, several airports are closed and officials are monitoring the spread of the ash cloud.
An estimated 4,000 people have already left the region around the volcanoes and Chilean officials have been trying to persuade more people to go.
They are concerned that the volcanic material could clog rivers and cause them to burst their banks.
"The forecast is for more rain on Tuesday, Wednesday and Thursday," an official from the national emergencies office (Onemi) told Efe news agency.
Ash trail In Argentina, ski slopes in the resort of Bariloche, about 100km (62 miles) east of the volcano, have been blanketed in ash.
Several airports have been closed while border crossings between Chile and Argentina have been closed.

Changing wind directions have pushed the ash cloud back and forth across southern Argentina and Chile.
Argentine officials are monitoring the spread of the ash, and say some could reach Buenos Aires province and the capital during Tuesday.
This is the first serious eruption of the volcano chain since 1960, when the area was hit by a massive earthquake.
Chile is one of the most volcanic countries on Earth. There are over 3,000 volcanoes dotted along its length, and around 80 of them are active.