Dallas shoots the lights out, goes up 3-2 in the NBA Finals 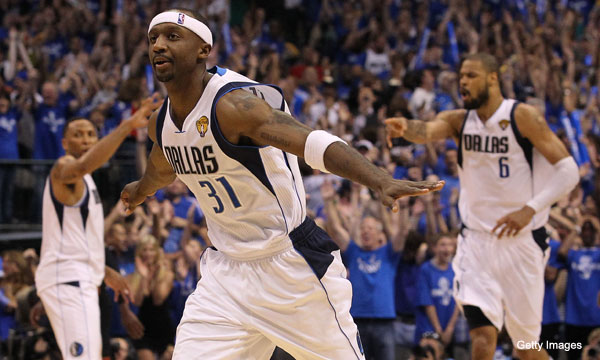 LeBron James(notes) didn't drop 40 points, or remind anyone of Michael Jordan. Miami's defense faltered, at times. Several Mavericks hit shots they weren't supposed to hit. And in the initial reaction, honestly, that's all you can criticize on both ends before crediting the Dallas Mavericks to no end for earning a 3-2 lead after winning Game 5 of the NBA Finals by a 112-103 score on Thursday night. Because this was some brilliant basketball.
On top of that? The hope is that this is Dallas' version of a one-sided win, before we settle in for two more games. In a series where both teams have played each other to a near tie, overall, this was Dallas' nine-point answer to Miami's eight-point win in Game 1. The Mavericks pumped in 130 points per 100 possessions, an astonishing mark against Golden State in February, much less against a vaunted Heat defense that has made mincemeat of all comers for the entire postseason. Further examination and the scorn of both media and the Miami coaching staff will reveal missteps that the Heat made along the way in letting Dallas pile up 112 points, but it's the appalling optimist in me that is telling you that Dallas made this game its own.
LeBron James had just 17 points on 19 shots (including just two points in the fourth quarter) in what was essentially a shootout, poor numbers no doubt, but he also registered 10 rebounds and 10 assists as he orchestrated a Heat offense that was (once you account for pace) miles beyond some of the best offenses we saw in the NBA this year. Dwyane Wade(notes) missed time with a hip contusion, suffered in the first half, and he didn't even start the second half while being worked on. Miami had its chances, offensively, but could not work as consistently as the Mavericks on that end. This is not why the Heat fell behind in the series, though.
The difference was defense, and the fact that Dallas just nailed a litany of tough, "ga'head and take it," shots. James' fourth quarter three-pointer clang was the wrong call, and you hated to see him happy to stay off the ball in the first half, but you can't pin this entirely on the deservedly-beleaguered star.
No, this was in Dallas' hands, as they lined up to spin in 13 three-pointers in 19 attempts (68 percent) and 52 percent of their two-point makes. Miami screwed up in its communication at times, leaving Mavs alone in delayed transition and failing to take away three-pointers (though they did close out properly and contest well) on several attempts, but you have to hand it to Dallas for rising to the challenge that comes with being favored, at home, while being asked to do what's expected against an opponent that has a way of destroying all reasonable expectations.
Dirk Nowitzki(notes), free from obvious sniffles and biding his time in the offense as usual, dropped 29 points while hitting all 10 of his free throw attempts. And while he was rock, Mavs guards Jose Juan Barea andJason Terry(notes) were the deciding factors, putting Dallas over the top in a way that Miami just could not counter. Despite, upon first glance, smart and desperate close-out defense.
Barea continued to miss following his drive, as he clanged three out of four shots within nine feet, but he also hit for 4-5 three-pointers, and Terry's three-pointer with 33.3 seconds to go in the game (for those of us vinyl-philes) cinched the deal, putting Dallas up seven after being down four points with six minutes left in the contest. Jason Kidd(notes), who had missed all three of his long range attempts in Game 4, hit for 3-5 in the win. 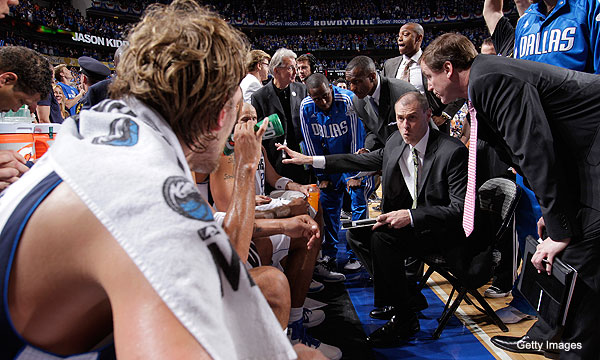 James could have done better. The matchups, clearly, do not serve him in a pairing like this, but he also could have taken Nowitzki's lead and attempted to play ugly, draw more fouls, and put his team in the penalty earlier in each of the quarters he played in. James shot just two free throws all night, missing a needed one in the fourth quarter, and his length and wingspan were no help as Barea and Terry ducked underneath screens or spotted up off a drive on their way to 38 combined points.
LeBron will take in criticism for yet another passive, at times, performance. Those critics will ignore the way he was running his team's offense, while nodding toward the idea that Wade's absence (he played 10 fewer minutes than James) gave LeBron ample opportunity to take over. LeBron should have taken over, and he should have played a more desperate, and less exacting, brand of basketball. One hand-check call that James earns early in a quarter, resulting in no free throws, will allow Mario Chalmers(notes) a chance to get to the line once Miami is in the penalty later in the quarter. An athletic team like Miami should not be merely nearly equaling Dallas' attempts (the Mavericks out-shot them 27-26 from the stripe) from the line.
James could have been the difference in the win, but he wasn't the reason for the loss. No, you'll have to just pin this on a Dallas offense that still seems to be getting better, 102 games into its season. Barea, Kidd, Terry, and even Shawn Marion(notes) (even if he wasn't as successful, at 4-11 shooting) shot with a level of confidence and smarts that they'll have to replicate if they want to win their first NBA title.
And they can win it, in Game 6 on Sunday. But considering how close Miami was in this loss and in this series, that figures to be no small feat. As it has been since October, the Heat still seem like some monster that has yet to be prodded enough into wanted to scorch some earth. With two potential chances left at the championship most had them pegged for, they'll still have time to breathe a bit of fire.
On Thursday, though, that was Dallas' realm. Those nets are still smoking.
Posting Source: http://sports.yahoo.com/nba/blog/ball_dont_lie/post/Dallas-shoots-the-lights-out-goes-up-3-2-in-the?urn=nba-wp4720
Posted by Anonymous at 12:53 AM