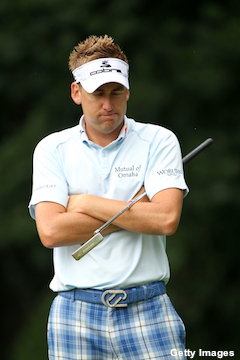 As Ian Poulter would probably tell you, it always pays to read the rules. Always. Playing for the first time at the Travelers Championship, Poulter must have felt like he was back in Blighty, as rain dominated play for much of the week.
The rain got so bad, in fact, that officials allowed players to pick up their ball from the extremely soggy fairways, clean it off, and then place it back on the ground for the first three rounds. You rarely see such a thing take place during a professional golf tournament.
But when players showed up on Sunday, most noticed the rule from earlier in the week was nowhere to be found on the rules sheet.
Except for Poulter. Teeing off on the first hole in the final round, he walked to his ball ... and promptly picked it up to clean it off. He was immediately informed that they were playing the ball down for the day, and that he'd be adding a penalty stroke to his first hole.
Oops! The bogey ended up being his only of the day, as he finished in a tie for 24th. Had Poulter read the rules closer, he would have taken home an extra $32,089, which ended up being the difference between T-17 and T-24.
Hey, at least Poults can take solace in the fact that the violation happened in the final round of an event he probably wasn't going to win.  Last year, he cost himself the chance at a title when he was penalized during a playoff for his ball moving his marker when he was on the green.

Posting Source: http://sports.yahoo.com/golf/blog/devil_ball_golf/post/Ian-Poulter-had-trouble-reading-the-rules-sheet?urn=golf-wp3096
Posted by Anonymous at 2:04 AM