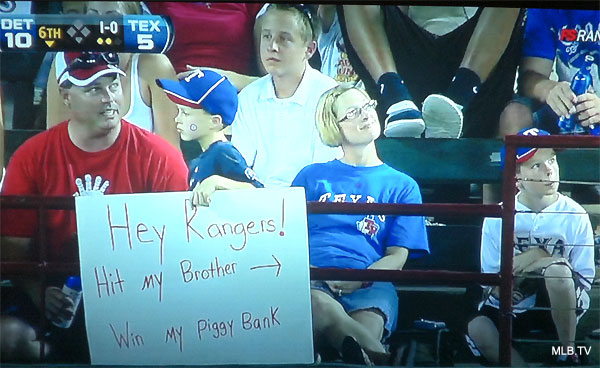 Aww, isn't that cute? In the past, the Texas Rangers had L'il Ronnie Washington and the 3-year-old who cried when he thought Michael Young(notes) was going to be traded.
This year, they have l'il Cain and l'il Abel, who showed up at Monday night's game against the Detroit Tigers and caught the attention of the team's television cameras.

Given the way the baseballs fly around Rangers Ballpark, it wouldn't have been surprising for the little brother to get his wish. Not that we here at the Stew ever endorse any kind of familial violence ...
Posting source: http://sports.yahoo.com/mlb/blog/big_league_stew/post/Photo-Young-Rangers-fan-places-bounty-on-brothe?urn=mlb-wp8810
Posted by Freelance at 4:15 AM