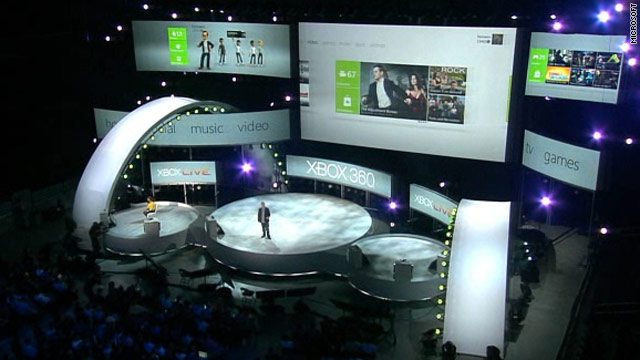 The new Xbox slogan is "You say it. Xbox finds it." The experience uses Microsoft's Bing search engine.
STORY HIGHLIGHTS
Los Angeles (CNN) -- Live TV on the Xbox and a more mature second generation of games for the Kinect were among the promises at a Microsoft briefing Monday in advance of the E3 video-game expo.
At the event, Microsoft said it hopes to make Xbox Live a hub for almost all types of entertainment. As such, they rolled out new partners, such as YouTube and Bing, that they hope will help the gaming system position itself in that way.
A Bing-enabled search tool will partner with another emerging Xbox feature, voice recognition, to make content easily accessible, said Dennis Durkin, Microsoft's chief operating and financial officer for interactive entertainment.
"We want you to have a reason to turn on the Xbox every day," Durkin said.
First launched in 2002, the Xbox Live network has become an increasingly important part of Microsoft's presence in the world of consumer electronics, reportedly generating more than $1 billion for the company annually.
In what could be a significant piece of the entertainment puzzle, the company said live TV shows will join the already existing options on the network this year.
Details on which TV networks might be involved weren't available, although Durkin said announcements should be expected between now and a fall rollout.
In a video demo, a couple used voice controls to surf the channels -- eventually landing on ABC's "Castle."
"This is our vision for the future of television," said Xbox Live Vice President Marc Whitten. "Effortless ... affordable."
Microsoft is the only one of the gaming industry's so-called "big three" that was not expected to involve a major hardware announcement here at the E3 Expo.
Nintendo is expected to roll out the next generation of its Wii gaming console Tuesday, and Sony was expected to unveil a new handheld gaming system later Monday.
Microsoft, which launched its motion-sensor Kinect system for the Xbox at last year's E3, opted to roll out a list of second-generation titles for the system geared more toward the hardcore gamer than the casual, family-friendly fare that largely came with last year's announcement.
"Mass Effect 3" and "Tom Clancy's Ghost Recon: Future Soldier" were two of the established, hard-core gaming titles that will get the Kinect treatment. Demos showed players using their hands, feet, faces and voices to direct characters through new generations of those franchises.
Kinect is a gaming system that doesn't require remote controls.
A "Kinect Star Wars" game was unveiled that lets players swing their arms to use a light saber or "The Force" to fight an army of clones. And independent hit "Minecraft" will be making its console debut exclusively for Kinect this winter.
Of course, there are some non-Kinect titles that gamers are anticipating as well. Rapper Ice T was called onstage to help demo "Gears of War 3."

Gamers also got a brief sneak peek at "Halo 4," which is due out for the 2012 holiday season.
Posting Source:  http://edition.cnn.com/2011/TECH/gaming.gadgets/06/06/e3.microsoft.announcement/index.html
Posted by Anonymous at 7:59 AM