'The Naked Adventurer' rescued while trying to row across Indian Ocean 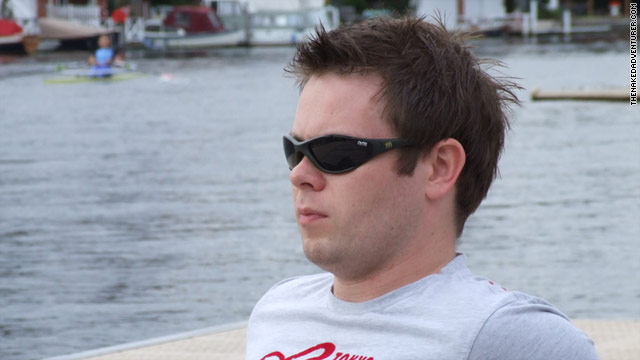 Keith Whelan "sustained a large laceration" when he was hit by a wave Monday just 206 kilometers off the coast of Australia.
STORY HIGHLIGHTS
(CNN) -- An Irish man known as "The Naked Adventurer" was rescued off the coast of Western Australia during a failed attempt to row across the Indian Ocean.
Keith Whelan -- whose website says he wants to become the first Irish person to row across the ocean -- was hit by a wave Monday and "sustained a large laceration," said Tracey Jiggins of the Australian Maritime Safety Authority.
"He was rescued 206 kilometers (128 miles) off the shore northwest of Geraldton," Jiggins said Tuesday. She said a merchant ship picked up Whelan, who was en route to Bunbury in Western Australia on Tuesday.
"His injuries are not life threatening, so (he) will remain on the ship until it docks at Bunbury tomorrow afternoon," Jiggins said.
A statement on Whelan's website -- TheNakedAdventurer.com -- says Whelan was asleep Monday night when the force of the wave threw him across the boat's inner cabin.
"Keith was able to stop the bleeding himself and ... decided to seek help at first light," the statement said.
When asked why he decided to attempt the 6,000-kilometer (3,728-mile) journey from Western Australia to Mauritius, Whelan said on his site, "I am a risk taker and risking your life to achieve a dream is the biggest risk you can take. Some might say it's foolish but to my mind it is only foolish if you don't know the risks and you don't prepare for them and train for every possible scenario."
Whelan is also raising money for Keep a Child Alive, which helps provide life-saving treatment, care and support to children and families in Africa and India affected by HIV/AIDS, according to the website.
The site also said Whelan embarked on the solo challenge in the buff.
"Having gotten into a rowing boat for the first time only a year or so beforehand, he will spend 110 days alone at sea, facing 50 foot swells, hurricane force winds and unrelenting sunshine ... and he'll be naked," it said.
Why naked?
"As the Ocean is a very salty environment, clothing tends to become encrusted with salt," Whelan said on the site. "I will have no means of cleaning this from any clothing at sea, so wearing this clothing when full of salt would lead to severe salt sores on my body which is why I will be naked for most of the journey."

Jiggins said she was not sure whether Whelan was found naked, "nor do I care."
Posting Source: http://edition.cnn.com/2011/WORLD/asiapcf/06/07/australia.naked.rower.rescued/index.html?npt=NP1
Posted by Anonymous at 8:13 AM