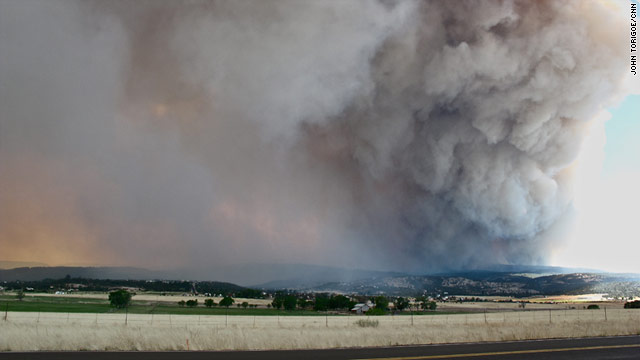 Arizona wildfire forces more from homes
(CNN) -- A fast-moving wildfire that has sent thousands fleeing in eastern Arizona is the second-largest blaze in the history of the state, records show.
The so-called Wallow Fire sweeping through Apache National Forest has burned approximately 389,000 acres, incident commander Joe Reinarz told reporters Tuesday.
That surpasses the 2005 Cave Creek wildfire, which was previously ranked the second-largest blaze in Arizona history. It scorched 248,310 acres, according to records published on the Southwest Coordination Center regional interagency website.
The Rodeo/Chediski blaze of 2002, which burned 468,638 acres, was Arizona's largest wildfire, officials said.
The current blaze forced the evacuation of up to 3,000 additional people Tuesday, a Red Cross official said. They join an estimated 2,700 evacuees in eastern Arizona.
Residents living in areas south of State Highway 260 and east of Greer, including South Fork and parts of Eagar, were told to leave their homes, fire officials said.
"We're probably in the range of between 5,500 and 5,700 people," said Mark Weldon, spokesman for the Arizona Red Cross.
Fire fighters struggled Tuesday to gain advantages over the fire, which had burned more than 300,000 acres.
It produced dense plumes of smoke that were visible from space and thick enough to reduce visibility to less than a mile in some places, the National Weather Service said.
The Arizona blaze is beginning to threaten neighboring New Mexico, and spillover smoke disrupted flights and prompted an air quality alert on the other side of the border, authorities said Tuesday.
New Mexico officials told residents in the town of Luna to be prepared to leave, according to Terri Wildermuth, a spokeswoman for the Incident Management Team overseeing firefighting efforts.
"I'm starting to feel like I've been chain-smoking and all my clothes smell like I've been camping," said CNN iReporter Eric Place, who lives in Albuquerque, New Mexico.
"Sometimes, not like huge flakes, but little ash particles, are visible."
In Arizona, the Red Cross has set up an evacuation center at a school in Lakeside.
So far, about 75 evacuees have checked into the shelter, said Weldon, though not everyone was expected to stay.
More than 2,000 firefighters are engaged in the fight against the fire, along with 20 helicopters, 141 fire engines, 46 water tenders and eight bulldozers, according to officials.
The blaze remained at 0% containment Tuesday night.
The National Weather Service warned critical fire weather, with low humidity and high winds, would continue at least through Wednesday in Arizona. The National Interagency Fire Center said similar conditions would heighten the risk of fires across the southwest, including Arizona, New Mexico, southeastern Colorado and west Texas.
Three separate blazes have consumed 165,017 acres in the Coronado National Forest, one of which has been burning since May 8, according to InciWeb, an online state-by-state database of active wildfires and other disasters.
Winds have hampered efforts of firefighters who've come from across the country to help battle the Wallow Fire.
That includes grounding planes that otherwise could be used to douse the flames from the air, Wildermuth said.
CNN's Phil Gast, Dana Ford and Ben Smith contributed to this report.
Posting Source:http://edition.cnn.com/2011/US/06/08/arizona.wildfires/index.html?npt=NP1
Posted by Anonymous at 2:29 AM