By Peter Valdes-Dapena | CNNMoney.com – 14 hours ago 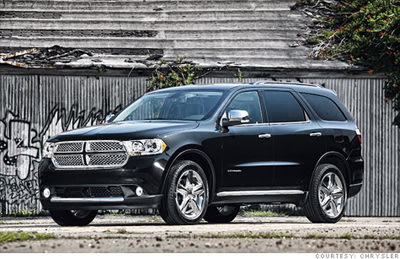 Thanks to electronic stability control and more stable designs SUVs like this Dodge Durango are now half as likely …
Once feared for their dangerous rollover tendencies, high-ridingSUVs are now much less likely to be involved in the deadly crashes than ordinary cars.

The biggest factor in the declining rollover rate, and an overall declining death rate for SUVs drivers is electronic stability control, the Institute said. ESC is a computer-based system that helps drivers maintain control during abrupt maneuvers and on slippery roads. Now available on all SUVs sold in the U.S., it has greatly reduced the tendency of SUVs to skid and flip over.

The Insurance Institute for Highway Safety is a private group financed by auto insurers.

SUVs, there's one for everyone

One of the big selling points for SUVs has always been safety. People believed that the big, heavy, high-riding vehicles kept them safer in a crash. But the tendency of SUVs to roll over, due to their tall bodies, offset much of that apparent safety benefit. While relatively uncommon, rollover accidents are far more deadly than ordinary impacts.

With rollovers less of a factor, SUVs now have among the lowest crash death rates and are even safer, pound for pound, than big cars. Only minivans are safer.

Each year, from 2006 through 2009, drivers of newer SUVs suffered an average of 28 deaths per million vehicles, according to the Institute. That's about half the average driver death rate for cars, which was 56.

The Institute only counts the driver's death even if multiple people died in the vehicle that crashed. By doing this, multi-passenger vehicles can be more fairly compared to those that carry fewer people.
Although the technology is available on almost all types of cars, it's still most common in SUVs. That's largely why drivers in 2009 model year cars are almost twice as likely to die in rollover accidents as those in 2009 SUVs. Stability control has helped bring down death rates across the board. The overall death rate for 1989 to 1993 model year vehicles was 110 per million registered vehicle years. For 2005 to 2008 model year vehicles, the death rate is 48.

Sheer size is still a big factor in auto safety, according to Insurance Institute's analysis. Although many small cars get good crash test scores, the vehicles with the highest death rates are, in general, small and the ones with the lowest are mid-sized or larger.

Death rates vary greatly from model to model for a variety of reasons. Besides the vehicles themselves, some car and truck models have lower death rates because of the way people tend to drive them. For instance, some high performance cars tend to have low death rates because owners drive them only occasionally.
Posting Source: http://autos.yahoo.com/news/suvs-now-least-likely-for-rollover-crashes.html
Posted by Anonymous at 1:26 AM