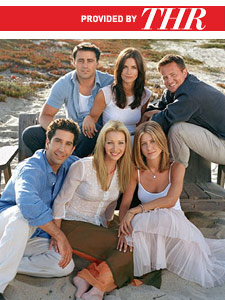 Some of TV's top executives from the past four decades may have gotten more than they bargained for when they agreed to be interviewed for a politically charged book that was released Tuesday, because video of their controversial remarks will soon be hitting the Internet.
The book makes the case that TV industry executives, writers and producers use their clout to advance a liberal political agenda. The author bases his thesis on, among other things, 39 taped interviews that he'll roll out piecemeal during the next three weeks.
The Hollywood Reporter obtained several of the not-yet-released clips. Each contains a snippet of an interview, usually some historical footage of the TV shows the interviewee was responsible for and, naturally, a plea to purchase the book, "Primetime Propaganda" by Ben Shapiro and published by Broad Side, an imprint of HarperCollins.
In one video, "Friends" co-creator Marta Kauffman says that when she cast Candace Gingrich-Jones, half-sister of Republican former House Speaker Newt Gingrich, as the minister of a lesbian wedding, "There was a bit of [a middle finger] in it to the right wing."
Kauffman also acknowledges she "put together a staff of mostly liberal people," which is another major point of Shapiro's book: that conservatives aren't welcome in Hollywood.

Maybe that's because they're "idiots" and have "medieval minds." At least that's what "Soap" and "Golden Girls" creator Susan Harris thinks of TV's conservative critics.
However, the ranks of dumb right-wingers has dwindled, according to Harris, whose video has her saying: "At least, you know, we put Obama in office, and so people, I think, are getting — have gotten — a little bit smarter."
Some of the videos have executives making rather obvious revelations, like when Larry Gelbart and Gene Reynolds talk about pacifist messages in "M*A*S*H" or when "MacGyver" producer Vin Di Bona says anti-gun messages were a recurring theme in that show.
But an additional video has Di Bona, who also created "America's Funniest Home Videos," becoming remarkably blunt about his approval of a lack of political diversity in Hollywood. When Shapiro asks what he thinks of conservative critics who say everyone in Hollywood is liberal, Di Bona responds: "I think it's probably accurate, and I'm happy about it."
Another video has Leonard Goldberg — who executive produces "Blue Bloods" for CBS and a few decades ago exec produced such hits as "Fantasy Island," "Charlie's Angels" and "Starsky and Hutch" — saying that liberalism in the TV industry is "100 percent dominant, and anyone who denies it is kidding, or not telling the truth."
Shapiro asks if politics are a barrier to entry. "Absolutely," Goldberg says.

Hear an exceprt from the Goldberg interview:
Listen to more clips at HollywoodReporter.com

When Shapiro tells Fred Pierce, the president of ABC in the 1980s who was instrumental in Disney's acquisition of ESPN, that "It's very difficult for people who are politically conservative to break in" to television, he responds: "I can't argue that point." Those who don't lean left, he says, "don't promote it. It stays underground."
Another video rolling out soon has "House" creator David Shore acknowledging that "there is an assumption in this town that everybody is on the left side of the spectrum, and that the few people on the right side, I think people look at them somewhat aghast, and I'm sure it doesn't help them."
In the book, subtitled "The true Hollywood story of how the left took over your TV," Shapiro also tells anecdotes of bias against conservatives. One example is Dwight Schultz, best known for his roles as Murdock in "The A-Team" and Barclay in "Star Trek: The Next Generation."
[Photo: Keith Olbermann's First Current TV Ad Revealed]
The late Bruce Paltrow knew that Schultz was a fan of President Ronald Reagan. When Schultz showed up to audition for "St. Elsewhere," a show Paltrow produced, to read for the part of Fiscus, Paltrow told him: "There's not going to be a Reagan [expletive] on this show!" The part went to Howie Mandel.
"Most nepotism in Hollywood isn't familial, it's ideological," Shapiro writes in the book. "Friends hire friends. And those friends just happen to share their politics."
Another video Shapiro will release shortly has producer-director Nicholas Meyer being asked point-blank whether conservatives are discriminated against in Hollywood. "Well, I hope so," he answers. Meyer also admits his political agenda for "The Day After," a TV movie he directed for ABC that was seen by 100 million people when it aired in 1983.
"My private, grandiose notion was that this movie would unseat Ronald Reagan when he ran for re-election," Meyer says.
Even seemingly harmless shows like "Happy Days" and "Sesame Street" have been used to advance a progressive agenda, according to Shapiro.
For example, William Bickley, a writer on "The Partridge Family" and a producer on "Happy Days," says he infused Vietnam War protest messages into the latter. "I was into all that," he says in a soon-to-be-released video.
"Television has been perhaps the most impressive weapon in the left's political arsenal," Shapiro argues in the book.
Other upcoming videos include: "Family Ties" creator Gary David Goldberg explaining how he tried to make Republican character Alex Keaton the bad guy but that actor Michael J. Fox was too darn lovable; and president of MTV Networks Entertainment Group Doug Herzog talking about his network having "superpowers" when it comes to its influence over young people.
The advancement of a gay and lesbian political agenda is mentioned by multiple executives, including Marcy Carsey, a producer of "Soap" and "Roseanne," and "Desperate Housewives" producer Marc Cherry, who is a rarity in Hollywood: a gay Republican.
In her video, Carsey also says she insisted on portraying characters smoking marijuana in "That '70s Show." "If this is a problem for you, we certainly understand, and we just won't do the show," she told executives at Fox.
Shapiro released two videos Tuesday, one featuring "COPS" creator John Langley saying he's partial to segments where white people are the criminals, and the other has Fred Silverman, the former head of ABC and later NBC, saying "there's only one perspective, and it's a very progressive perspective" in TV comedy today.

[Related: Alec Baldwin Joins Twitter; Which 10 People is He Following?]

Shapiro said the executives felt comfortable talking about politics with him because they assumed, incorrectly, that he is on the left.
"Most of them didn't Google me. If they had, they would have realized where I am politically," he said. "I played on their stereotypes. When I showed up for the interviews, I wore my Harvard Law baseball cap — my name is Ben Shapiro and I attended Harvard, so there's a 98.7 percent chance I'm a liberal. Except I happen not to be."
Shapiro said he'll time the debut of certain videos for maximum effect. One that slams Sean Hannity, for example, is reserved for his scheduled appearance on Hannity's show on the Fox News Channel.
And conservative pundit Ann Coulter has a new book out June 7. "I have two people ripping her by name, so I'll release those the day Ann's book is released," Shapiro said.
One of those slamming Coulter is George Schlatter, who directed and produced "Rowan & Martin's Laugh-In" in the 1970s, using the show to knock Republicans and the Vietnam War. "The fact we [ticked] the Pentagon off, that pleased me enormously," he says before calling Coulter a vulgar word.
In his video, Schlatter also goes off on right-wing radio hosts Rush Limbaugh and Laura Ingraham.
Shapiro says he didn't disclose that he'd be releasing the tapes, but that his subjects have no reason to complain.
"I asked them for permission to tape, and there's no reasonable expectation of privacy when you're being interviewed for a book," he said.
"If they're going to be shocked at something, it should be themselves, not me," Shapiro said. "They should be shocked that opinion is so one-sided in Hollywood that it's OK to say, 'I'm fine with discrimination.'"
"My whole book is a plea for openness in the industry," he added. "Hire people from the other side of the aisle once in a while, or at least stop mocking them."

Posting source: http://tv.yahoo.com/blog/tv-executives-admit-in-taped-interviews-that-hollywood-pushes-a-liberal-agenda--3086
Posted by Freelance at 2:21 AM