For white-sand beaches, salty breezes, freshly caught seafood, and no crowds, head to one of the world’s best secret islands.

Hollywood scouts were on to something when they skipped over Mykonos and chose a secret island in Greece as the location for Mamma Mia. The movie was a $600-million hit, in part because it fueled peoples’ fantasies of escaping to a secluded island (and yes, those catchy ABBA tunes didn’t hurt).

Surprisingly, that picture-perfect movie location, Skopelos, has stayed under the radar. When you hop off the ferry, you’ll be wowed by the view of the shimmering Aegean Sea, the island’s tile-roofed tavernas, and a decided lack of travelers.

There are still gems like Skopelos hidden all around the globe, if you know where to look. T+L editors have done the hunting for you to uncover secret islands where you can truly unwind.

A one-hour ferry ride from Skiathos, the island of Skopelos is so picture-perfect (hidden coves; blue-roofed tavernas; hundreds of Byzantine-era churches) that Hollywood chose its Kastani Beach as a set for Mamma Mia. At the just-renovated Adrina Beach Hotel (Panormos; 34-24240/23371; adrina.gr; doubles from $98), the 49 pastel-colored rooms face the pine-tree-studded coastline, strewn with daybeds. Later this year, the same owners will debut the more upscale Adrina Resort & Spa (Panormos; 30-24240/23371; theresort.gr; doubles from $110), with 16 terraced rooms and 22 villas that look out onto the turquoise Aegean. 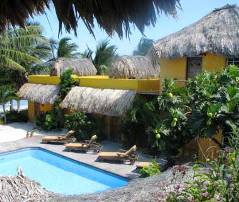 Photo: Courtesy of Seaside Cabanas
There’s nary a traffic light on this laid-back island—a five-mile strip of land that’s a 15-minute flight from Belize’s main airport. Head to Shark Ray Alley to snorkel among nurse sharks and stingrays or go scuba diving at the underwater caves of Blue Hole. Aboveground, try the curried lobster at the roadside Jolly Roger’s Grill (Ave. Hicaco; 011-501/664-3382; dinner for two $25). On the eastern side of the Caye, Seaside Cabanas (501/226-0498; seasidecabanas.com; doubles from $105) has 10 rooms and six colorful cabins, each with its own roof terrace for taking in those amazing Caribbean views.

T+L Tip: Visit during the annual Lobster Festival (July 1–3), when the main road turns into a street party. 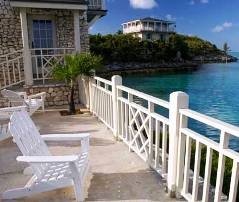 Partially protected from commercial activity since 1959, the Exuma Cays are normally the domain of cruisers—and a few privileged landowners such as Johnny Depp. But guests at Sampson Cay have access to the area’s thriving patch reefs and isolated islets. At the Sampson Cay Club (877/633-0305; sampsoncayclub.com; doubles from $275), the five modest villas include wide patios that are perfect for watching the sunset. While the limestone karst terrain may be rugged, every path ends on a stretch of secluded white sand.

T+L Tip: Rent a Boston Whaler from the hotel (from $250 per day) to tour the surrounding islands. 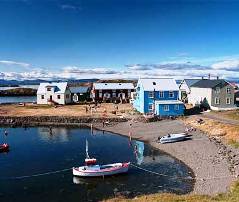 Don’t expect to see much night sky here: in summer, daylight shines for up to 21 hours on this rocky one-mile hideaway in Breiðafjörður Bay. Lush meadows and multicolored timber houses dot the scenery, and the mainland’s Snæfellsjökull volcano is always within eyeshot. In town, Flatey (354/555-7788; hotelflatey.is; doubles from $180) stays true to simple Scandinavian design (blond-wood furniture; whitewashed walls), and the downstairs restaurant turns into a live-concert venue for local talent at night. 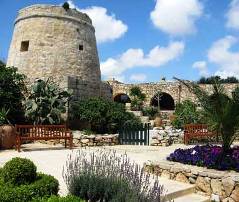 This tiny Mediterranean island is where Odysseus was “held captive” by Calypso after the Trojan War. Take one look at the landscape, and it’s no wonder he stayed seven years. Rolling hills, crumbling castle walls, and a Bronze Age fortress are some of the most endearing features. Check in to Hotel Ta’ Cenc & Spa (Cenc St., Sanat; 356/2219-1000; tacenchotel.com; doubles from $260), with 85 stone bungalows overlooking the sea. From there, it’s a short drive to Dwejra Bay, where you can take a dip, then munch on pastizzi (ricotta-filled pastries) at Tapie’s Bar (St. Francis Square; lunch for two $20). 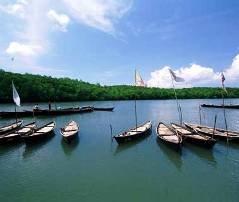 These 550 atolls in the Bay of Bengal have all the prerequisites for an idyllic getaway—with an added dose of culture. You can still see a few ancient indigenous tribes. The island of Havelock, a two-hour ferry ride from Port Blair, is arguably the most appealing, thanks to its bone-white beaches. Book a sea-facing villa at the new SilverSand Beach Resort (91-3192/282-493; silversandhavelock.com; doubles from $130) and ask the staff to take you on a trek to the Kala Pather forest.

T+L Tip: Get to know the area’s historic villages on an excursion with Island Vinnie’s (islandvinnie.com; tours from $11). 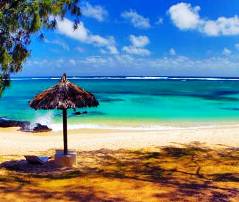 Locked in a shallow lagoon, this fish-shaped island has served as a paparazzi-free bolt-hole for Prince William in years past. With its verdant valleys and numerous islets, it’s a haven for hikers and kite-surfers, too. Stay at the beachfront Mourouk Ebony Hotel (011-230/832-3351; mouroukebonyhotel.com; doubles from $205), with 34 Creole-style rooms. For freshly caught seafood, don’t miss Coralie la Diffe’rence (Countour Oblasse; 230/832-1071; dinner for two $40). 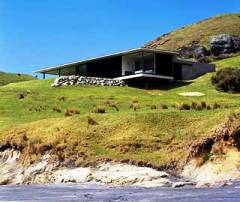 At 104 square miles, “The Barrier” is the largest island off the Kiwi coast, but it’s also the most untouched. Spend your days hiking through dense kauri woods or exploring jagged inlets. Then refuel over mussel fritters at Tipi & Bobs (38 Puriri Bay Rd., Puriri Bay; 64-9/429-0550; dinner for two $45). The four modern rooms at the glass-walled Oruawharo Beach House (5 Ringwood St., Torbay; 64-9/473-6031; ihu.co.nz; doubles from $450) are designed by New Zealand architecture firm Fearon Hay and have spectacular views of Oruawharo Bay. 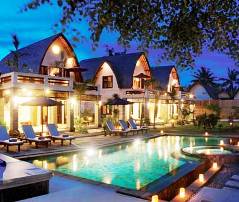 Searching for the Bali of, say, 1970? Head to Gili Trawangan, a tiny island near Lombok dotted with countless waterside cafés. No motorized traffic is allowed here—the best way to get around is to rent a bicycle or use your own two feet. The daily agenda involves nothing more than fishing, diving, or kicking back with a cold beer at Scallywag (South Beach; 62-370/645-301; lunch for two $30). On the southern coast, Vila Ombak (hotelombak.com; doubles from $150) has 115 airy oceanfront rooms.

T+L Tip: Hop the ferry to Mount Rinjani (lombokmarine.com; tours from $225), an active volcano on Lombok. 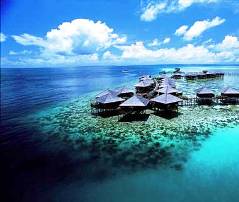 Diving enthusiasts flock to Mabul, off the northeastern coast of Malaysia, where the exotic marine life is on a par with the Galápagos—native sea moths, bobtail squids, and the elusive paintpot cuttlefish are just a few of the inhabitants. At Sipadan Water Village Resort (6-089/784-227; swvresort.com; doubles from $365), the 45 stilted bungalows are cooled by constant sea breezes.