Pedestrian bridges are going to cool new heights, turning the need to get from here to there into an adventure.

Stroll the 1.3-mile Hudson River Walkway inPoughkeepsie, NY—taking in the exhilarating view of water, treetops, and sky—and you could almost forget that we live in a world designed for the automobile. Here, the environment belongs not to those who roar by at 70 mph, but to pedestrians like you. 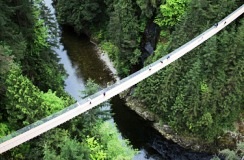 Capilano Suspension Bridge, Vancouver
Photo Courtesy of Capilano Suspension Bridge
The concept of pedestrian bridges isn't new—Venice'sRialto Bridge dates back to 1588, and even the Brooklyn Bridge architects made room for walkways alongside the car lanes. But just recently, since around the turn of the millennium, we've rediscovered the notion that regular people are important enough to deserve some spectacular feats of engineering.
Sure, these pedestrian bridges make a big impression with sweeping views and innovative features like solar-powered LED lighting or the ability to levitate and roll upwards into a wheel. But above all, they reward us for traveling, whether on foot or two wheels, with our own muscle power.

Come face-to-face with wildlife in Vancouver's lush treetop ecosystem while strolling this skinny 450-foot-long canopy bridge that floats 230 feet above the Capilano River. Just 10 miles from downtown, the bridge dates back to 1889, when a Scottish civil engineer strung a hemp rope and cedar plank to his isolated cabin.
A Growing Trend: The Capilano forest also features a new 650-foot-long network of bridges and viewing platforms connecting several of the towering Douglas fir trees. And the concept has taken hold—canopy walks have lately been built in the Peruvian Amazon rainforest and Borneo's Danum Valley. 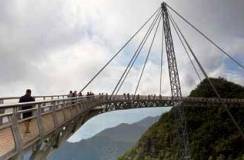 More like an observation deck, this bridge to nowhere dangles spectacularly about 2,300 feet above sea level in Langkawi, an archipelago on Malaysia's west coast. It's reached by a harrowing cable car ride up Mount Mat Cincang, and the bridge's gently curving promenade provides tourists with dazzling views of the Andaman Sea far below. Every posted description of the bridge includes the not-entirely-reassuring phrase: "Langkawi sky-bridge is safe."
Spine Tingling: The view is impressive and so is the engineering: the bridge is suspended from a single mast that sticks up from the mountain below like a construction crane. 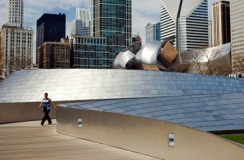 Get an overview of Chicago's most impressive architecture, not to mention Lake Michigan, when you set out from the brushed-steel Jay Pritzker Pavilion and amble along Frank Gehry's 925-foot-long bridge above Columbus Drive. Clad in shiny lizard-skin-patterned steel and paid for by its oil-company namesake, the overpass's only shortcoming is that it doesn't make it all the way to the water's edge—you're left to fend for yourself on traffic-filled Lakeshore Drive.
Companion Bridge: An ultra-skinny minimalist footbridge, designed by Renzo Piano, leads from Millennium Park to the architect's new wing of the Art Institute of Chicago. 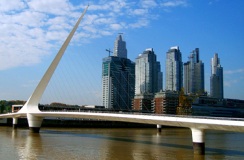 Architect Santiago Calatrava's "Woman's Bridge" on the Rio de la Plata is female by association; the surrounding streets are named for noteworthy women such as human rights activist Alicia Moreau de Justo. The bridge faces a new crop of trendy hotels, restaurants, and condos in Puerto Madero—and can take some credit for inspiring the neighborhood's redevelopment.
Fancy Footwork: With a single mast pointing skyward at a 45-degree angle, the bridge sometimes gets compared to a couple doing the tango. We don't quite see it, but in Buenos Aires, tango dancers are never far away, especially on the streets of San Telmo. 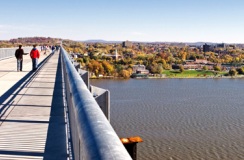 Walkway over the Hudson, Poughkeepsie
Photo by: Alvis Upitis / Alamy

Walkway over the Hudson, Poughkeepsie, NY

It feels like you're walking in the sky. This former railroad bridge is suspended 220 feet above a wide, unusually straight stretch of the Hudson that Dutch seafarers once called "Lange Rack" or Long Reach. That means you can see up and down the river for miles—without any overhead structure to obscure the view.
Conflicting Claims: The official website states that, at 6,767 feet long, it's the world's longest pedestrian bridge. One not-so-small problem: the Anping Bridge in Fujian China, a stone pedestrian bridge dating from the 12th century, is 526 feet longer. 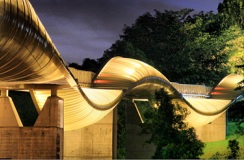 You can see why Singapore is nicknamed the Garden City. Crossing from one hilltop park to another, 118 feet above busy Henderson Road, its highest pedestrian bridge overlooks treetops, flowering bushes, the harbor, and the skyline. Cooler still is this bridge's resemblance to a Slinky toy. A sculptural wave of steel ribs follows the walkway, periodically curling up and over the edge to create little coves of sheltered seating.
Flora and Fauna: Singapore's Southern Ridges area is also home to the Canopy Bridge, where you'll find wild orchids, pitcher plants, and tons of birds. 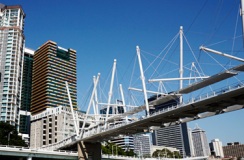 Masts attached to cables jut out from this bridge in all directions—as if trying to distract your attention from the impressive cluster of skyscrapers lining the Brisbane River. Powered by 84 solar panels, Kurilpa looks its finest when the LED lighting system puts on dazzling shows.
Push and Pull: It may appear to be a crazy jumble, but the positions and the strength of the mast connections are the product of sophisticated calculation; this is the first major bridge built according to the principles of tensegrity. 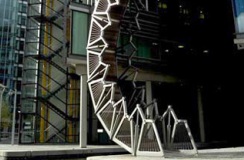 The payoff for pedestrians is usually the view from on high, but here the bridge itself is the sight to see. Each Friday at noon, genius architect Thomas Heatherwick's Rolling Bridge allows a single boat to pass in or out of its moorage. You'll be transfixed as the bridge, powered by hydraulic rams, levitates upward as a unit, and then curls backward, allowing its eight triangular hinged sections to roll into a wheel.
Neighborhood Facelift: The Rolling Bridge is one small element in a major redevelopment of the area around Paddington Station. Other novel canal crossings include the Helix Bridge, which screws and unscrews to allow boats to pass. 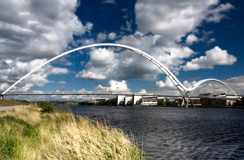 Opened in 2009, this long bowstring bridge is named for the infinity symbol formed by its dramatic double curve and reflection in the River Tees. The main arch is almost 400 feet tall and the span is nearly 900 feet, creating a flamboyant wave. Special nighttime lighting enhances the infinity effect, and LEDs built into the handrails and footpath are programmed to change color as pedestrians and bicyclists pass by.
Be Transported: Another landmark Tees crossing, the Middlesbrough Transporter Bridge, completed in 1911, carries cars and pedestrians across the river in a suspended gondola, 90 seconds each way. 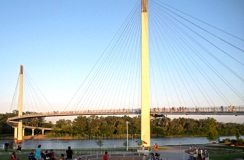 The first pedestrian bridge to link two states extends for 3,000 feet over the bucolic Missouri and traces a gentle S-curve around its two supporting towers—a plaque marks the spot where you can have one foot in Nebraska and the other in Iowa. Opened in 2008 and illuminated at night, the bridge has become a teen hangout and has energized the waterfronts of two cities that haven't always been so hospitable to pedestrians.
On the Waterfront: On the Omaha side, the bridge syncs up with a riverfront trail, part of a 1990s redevelopment.