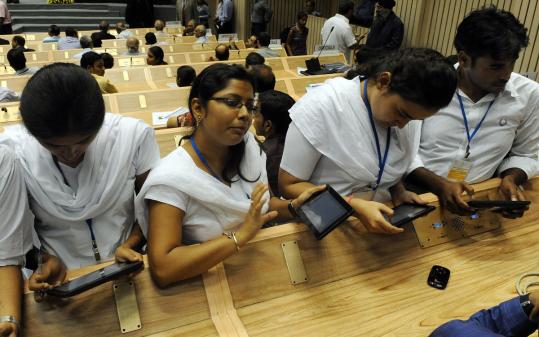 Students in India used the inexpensive Aakash computer tablet introduced yesterday in New Delhi. Developer Datawind is selling the tablets to the government for about $45 each, and subsidies will reduce that to $35 for students and teachers. (PRAKASH SINGH/AFP/GETTY IMAGES)
By Katy Daigle Associated Press / October 6, 2011

NEW DELHI - India introduced a cheap tablet computer yesterday, saying it would deliver modern technology to the countryside to help lift villagers out of poverty.
The computer, called Aakash, or “sky’’ in Hindi, is the latest in a series of world’s cheapest innovations in India that include a $2,040 compact Nano car, a $15 water purifier, and $2,000 open-heart surgery.
Developer Datawind is selling the tablets to the government for about $45 each, and subsidies will reduce that to $35 for students and teachers. In comparison, the cheapest Apple iPad tablet costs $499, while the recently announced Kindle Fire will sell for $199.
Datawind says it can make about 100,000 units a month at the moment, not nearly enough to meet India’s hope of getting its 220 million children online.
Human Resources Development Minister Kapil Sibal called the announcement a message to all children of the world.
“This is not just for us,’’ he said. “This is for all of you who are disempowered. This is for all those who live on the fringes of society.’’
Despite a burgeoning tech industry and decades of robust economic growth, there are still hundreds of thousands of Indians with no electricity, let alone access to computers and information that could help farmers improve yields, business start-ups reach clients, or students qualify for university.
The launch - attended by hundreds of students, some selected to help train others across the country in the tablet’s use - followed five years of efforts to design a $10 computer that could bridge the country’s vast digital divide.
“People laughed, people called us lunatics,’’ ministry official N.K. Sinha said. “They said we are taking the nation for a ride.’’
Although the $10 goal was not achieved, the Aakash has a color screen and provides word processing, Web browsing, and video conferencing. The Android 2.2-based device has two USB ports and 256 megabytes of RAM. Despite hopes for a solar-powered version - important for India’s energy-starved hinterlands - no such option is currently available.
Both Sibal and Datawind chief executive Suneet Singh Tuli called for competition to improve the product and drive prices down further.
“The intent is to start a price war. Let it start,’’ Tuli said, inviting others to do the job better and break technological ground - while still making a commercially viable product.
As for the $10 goal, “let’s dream and go in that direction. Let’s start with that target and see what happens,’’ he said.
“To every child in India I carry this message. Aim for the sky and beyond. There’s nothing holding you back,’’ Sibal said before handing out 650 of the tablets.