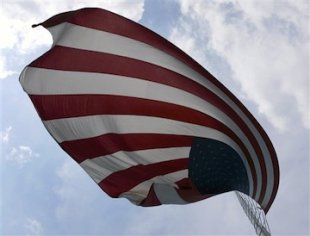 Vietnam and Korean War veteran Fred Quigley is in a battle with a developer over his wish to fly an American flag on a 14-foot flagpole outside of his home in Macedonia, Ohio. Joe Migliorini, a partner in the development company's firm and the head of the homeowners' association for the retirement community in which Quigley lives, says Quigley must fly the flag from a stanchion connected to his home. Otherwise, Migliorini points out, Quigley's patriotic display would be in violation of association rules.
"Landscapers have to work around it," Migliorini told ABC News, adding that federal flag etiquette also demands the flag be removed if it's not lit up at night. "That creates a need for electricity to be run out to the pole."
"To me, a flagpole is a thing of boldness and is substantial," Quigley told The Fall News press. "Putting a flag on your house is like putting a wreath on your door. It doesn't mean as much."

The paper explains that the development where Quigley lives is a fairly recent one--meaning that the homeowners' association isn't yet fully representative of the homeowners on site. That requirement will only be cleared once the developer sells 75 percent of the lots in the community.
That doesn't mean that Quigley and his neighbors are being quiet about the controversy, however. Migliorini claims about 20 residents have protested the flag decision so far. "Joe Migliorini is the association," Quigley complained.
Dozens of supporters, including members of the American Legion, gathered around the pole last week for a flag-raising ceremony, the paper reported.
ABC reports that 60 million Americans have to abide by various homeowners' association rules, which "decree everything from what color you can paint your house to how often your trash gets picked up and where you can park your car."
In September, we wrote about various battles between residents and homeowners associations over the Gadsden flag, which features a coiled rattlesnake and the words "Don't Tread on Me."

Posting Source : http://beta.news.yahoo.com/blogs/lookout/homeowners-association-tells-veteran-remove-flagpole-154326848.html
Posted by Anonymous at 2:18 AM