Out of work for a while? Tell us your story 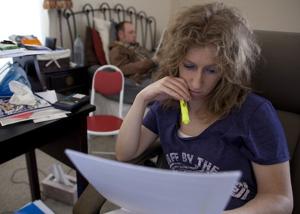 It's no secret that this country is enduring an unemployment crisis.
But what's especially troubling about today's jobless scene is that the United States is actually in the midst of a *long-term* unemployment crisis. Of the nearly 14 million Americans who are officially jobless, more than 6 million have been out of work for more than six months, the official definition of long-term unemployment.
The average spell of joblessness now lasts more than nine months--an all-time high since records began in 1948. And, amid fears of a double-dip recession, things aren't likely to get much better any time soon.
Having so many people out of work for so long is disastrous--both for those who find themselves without a stable income, and for society at large. When people go for months or years without a job, their skills tend to atrophy, and they lose valuable connections to the working world.
They can also become discouraged: One study found that the amount of time people spend looking for a job decreases sharply the longer they're unemployed. And, perhaps not surprisingly, they start sleeping later in the mornings. Meanwhile, the recent spate of Help Wanted ads bearing warnings like "Unemployed need not apply" suggests many companies are reluctant to hire the jobless, especially those who haven't worked in a while. Small wonder, then, that many of the older workers now in the ranks of the long-term unemployed aren't returning to the workforce at all.
It all makes for a bleak paradox: The longer you've been out of work, the harder it is to find it.
But statistics and studies only go so far in helping us to understand the struggles of the long-term unemployed. That's why we want to hear from you.
If you were out of work for six months or more at any time since the Great Recession began in December 2007, tell us your story. We want to know things like:
• How did you lose your job in the first place?
• What was the hardest thing about being out of work so long?
• Were potential employers wary of hiring you when they found out you hadn't had a job in while?
• How helpful were jobless benefits in keeping you and your family afloat? Did you exhaust them?
• Are you seeing more competition for openings than you did when the economy was booming?
• Did you find work in the end? If not, are you still looking? Or have you given up?
• If you ultimately landed a job, how did you do it? Any useful tips?
• How should we go about making it easier for the long-term unemployed to find work?
You can leave your response in the comments section, or you can send us an email. We plan to collect some of the most compelling reports we get, and apply these highly personal and individual stories to shed some light on what it's like to be among the long-term jobless in today's downturn.
We're looking forward to hearing from you--and your ideas for weathering this crisis in long-term joblessness.

Posted by Anonymous at 2:15 AM