By Paul A. Eisenstein | The Detroit Bureau – 13 hours ago 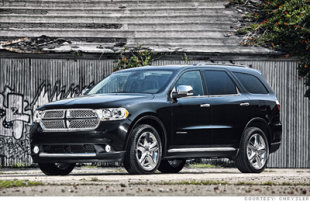 The Dodge Durango was one of the rare all-new models to improve its quality score.
New car shoppers will find some good news and bad in the latest Initial Quality Study: the quality of all-new 2011 models “declined considerably”, but the quality of carryover products was better than ever, according to from Power and Associates.

Japanese automakers, led by Toyota’s Lexusluxury brand, dominated this year’s Initial Quality Study, or IQS, which measures problems with new vehicles during the first 90 days of ownership. Honda jumped to second in the annual survey, but the biggest improvement was posted by perennial quality laggard Land Rover.
A variety of issues led to the unexpectedly poor performance of all-new 2011 models – the first time since 2006 that newly-launched products haven’t improved in quality compared to the vehicles they replaced.  The most notable were engine/transmission problems, according to Power Vice President David Sargent.  But there were also significant issues with the latest audio/entertainment and navigation systems.

“Clearly, consumers are interested in having new technology in their vehicles, but automakers must ensure that the technology is ready for prime time,” said Sargent, Power’s head of global vehicle research. “Successful companies will be those that can take this incredibly complex technology and make it reliable, seamless and easy for owners to operate while they are driving. There is an understandable desire to bring these technologies to market quickly, but automakers must be careful to walk before they run.”

Overall, the industry continued to post gains in quality, a critical competitive area.  On the whole, the industry averaged 107 problems for every 100 vehicles included in the 2011 study, down from 109 the year before.  But the defect count rose to 122 problems per 100 vehicles, or PP100, when limited to all-new vehicles or those that underwent a significant redesign for the 2011 model-year.  A year ago, similarly new or updated offerings averaged 111 problems.

Focusing on carryover models alone, the problem count dropped to a record-low 103 compared with 108 PP100 in the 2010 IQS.

In today’s competitive market, where many buyers are looking for the newest and hottest offerings, the problems the industry is experiencing with all-new products is a concern, according to Sargent, who cautions, “Expected reliability continues to be the single-most-important reason why new-vehicle buyers choose one model over another, and no manufacturer can afford to give consumers any doubts regarding the quality of their latest products.”

With just 73 problems per 100 vehicles, Lexus handily led the industry in the latest Power study of out-of-the-factory quality, but Honda jumped from sixth to 2nd place, followed by its luxury arm, Acura.  Mercedes-Benz, ranked fourth, was the only non-Japanese brand in the Top 5, Mazda rounding that group out by jumping from 18th, in 2010, to number five.

While domestic makers were shut out of the Top 5, Chevrolet and Ford each received two segment awards, as did Mercedes-Benz.  Other single-segment winners were Cadillac, Chrysler, Dodge and Mazda.

While Land Rover might not have landed any segment awards it did improve its quality numbers substantial.  Compared to 2010, it had 47 fewer problems per 100 according to the latest IQS.

Not all new models lost ground, according to Power, which described the freshly-launched Hyundai Equusluxury sedan and Dodge Durango SUV as “notably strong performers, each ranking second in their individual segments.

The 2011 IQS was compiled from survey forms filled out between February and March by 73,000 new car buyers.  They were asked 228 questions about the quality of their vehicles after 90 days of ownership.
Posting Source: http://autos.yahoo.com/news/initial-quality-of-new-2011-models-declined-considerably--cautions-new-study.html
Posted by Anonymous at 12:37 AM