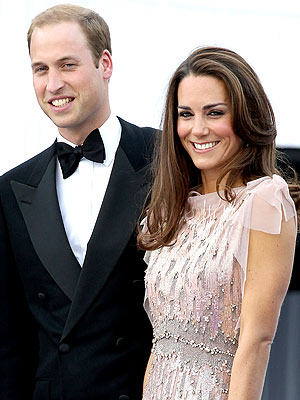 Catherine, Duchess of Cambridge and William, Duke of Cambridge
Chris Jackson/Getty
Amid a sea of camera flashes, Catherine, Duchess of Cambridgemade her first official bow as a working princess Thursday night, joining her husband, Prince William, at a glamorous London fundraiser. Kate, 29, stepped out of her blue Jaguar in a floor-length blush organza Jenny Packham gown at the 10th annual Absolute Return for Kids (ARK) gala dinner. As William placed a guiding hand on his wife's back, she giggled a little as she stopped on the purple-carpeted steps for photographs. The children's charity benefit took place in a custom-made marquee at Perks Field, just a stone's throw from Kensington Palace, where the couple are set to have an apartment as their London home. ARK founder Arpad Busson told reporters he was thrilled that the royal couple were the evening's guests of honor. William and Kate, "bridge the generations," said Busson. "We need to get young philanthropists involved with us. They could not have been a better choice." William and Prince Harry's foundation and ARK "share a common vision and commitment to transform the lives of disadvantaged children in the U.K. and around the world," the palace said in a statement. Before the couple took their seats, they were surrounded by guests – some of whom also took their photo. As Kate and William separated to meet different groups, the duchess was asked, "Where's your husband?" by curious guests. "We always get split up at these things," she replied. The couple were seated across from each other at a 25-seat table, where Tom Ford, Jemima Khan Prince Pavlos of Greece, Princess Marie-Chantal and Countess von Bismarck also sat. Later, William, 28, made his first public speech since his wedding, launching a four-year collaboration between his own charitable organization, the Prince William and Prince Harry foundation, and ARK. "Harry and I find ourselves in a position to be able to help. I really believe that individuals can make a serious difference – whether it's through wealth, through position, or some other advantage," he said. "Catherine and I hope to use our philanthropy as a long-term catalyst for meaningful change." As he returned to his table, William received a standing ovation. After the couple left the party around 10:30 p.m., they were replaced by rock royalty – the Kings of Leon were due to perform for the 900 guests.
Posting Source: http://www.people.com/people/package/article/0,,20395222_20501444,00.html
Posted by Anonymous at 2:34 AM