Provided by:
By Sean O’Neill 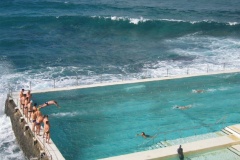 For more than a century, Tasman Sea
waves have crashed against — and into —
the Bondi Icebergs' pool in Bondi Beach, Australia.
suburbanbloke / Flickr
More from BudgetTravel.com
More from Yahoo! Travel
You don't have to be a millionaire to enjoy a splash of the good life: These pools are open to one and all and are a great way to experience a new side of a city — all for less than the cost of a pool noodle (or two).


For more than a century, Tasman Sea waves have crashed against — and into — the Bondi Baths, an Olympic-size pool that became the home of the Bondi Icebergs, a winter swimming club, in 1929.

Because of its solid concrete construction, the pool is always slightly colder than the ocean, even though it uses the same water — you can follow the fluctuating temps on its Twitter feed. The public is welcome here, but locals who want to become Icebergs (i.e., earn their official stripes as winter swimmers) must log 75 swims here during what most would consider the "off-season" (when pool temps dip below 60ºF in wintry July).

Casual visitors favor summertime dips, when the water warms to the high 70s by February. Upon emerging from the striking shoreside pool at the Icebergs, bathers enjoy the amenities of its modernist, beachy clubhouse complex, which includes a gourmet bistro, two bars, fitness facilities, and a 1,600-square-foot sundeck. 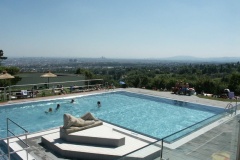 
Perhaps "Krapfenwaldlbad" doesn't exactly roll off the tongue, but it happens to be the name of one of Vienna's loveliest neighborhoods — as well as its renowned park with four heated pools for swimmers, socializers, and families.

First opened in 1923 and perched like a leisurely sentinel on a hill, the main pool has become a fixture in the city's summer social scene. Accordingly, amenities run the gamut from a restaurant and a bar to table tennis, soccer, beach volleyball, and a children's playground. While the pools themselves may be standard fare, their exclusive views over the entire city, vineyards, and, well, other bathers, are what make them exceptional.

Affordability: Adult admission to the park, including pool access, $6.70.

This circular wooden pavilion in the Baltic Sea, Kastrup Søbad, is a seven-minute train trip from the heart of downtown Copenhagen.
risager / Flickr)


Kastrup Søbad, a circular wooden pavilion in the Baltic Sea, captures the essence of Danish design with its clean lines and natural finish. Created in 2005, the "sea bath" rises up at the end of a 328-foot boardwalk that connects it to shore (where visitors will find showers and lockers) and spirals in a way that shields bathers from sea winds.

The walls of the $1.3 million structure intentionally slope to provide a vantage point for admiring the three miles of beaches nearby. The swimming here is probably most enjoyed by those of hearty Scandinavian stock, given that the clear waters only reach the low 60s at their warmest. But it's a perfect place to experience hygge — an all-encompassing Danish term that means spending quality time with good friends — and it's only a seven-minute train trip from the heart of downtown. 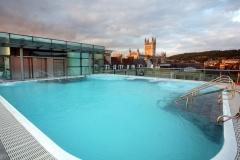 
The Thermae Bath Spa taps into the same thermal springs that once soothed Roman conquerors in 43 A.D. From the naturally heated rooftop pool on the spa's New Royal Bath building, visitors can take in a panorama that includes the ornate towers of 17th-century Bath Abbey in the center of town.

This building also houses the Minerva Bath, the largest and most futuristically stylized of the three on offer, with massage jets, a whirlpool, and a "lazy river." Here, as well as in the more intimate Cross Bath building (erected on a Celtic goddess-worshipping site), the mineral-rich water boils up out of the earth at 113ºF but is mechanically cooled to a comfortable 91ºF. While in town, it's worthwhile to check out the ruins in the nearby Roman Baths museum, where the spirits of those who soaked before you roam. 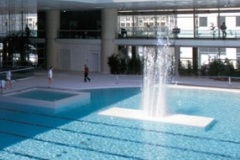 
Visitors to Montpellier's Piscine Olympique d'Antigone are simultaneously greeted by Antigone and Venus — that is, the Olympic-size lap pool and leisure pool — upon entering the modernist bi-level sports complex.

Downstairs, Antigone hosts everything from lap sessions to sports matches — and some of France's elite Olympic athletes train here, if you're looking to bump into the water-polo team. Upstairs at Venus, bathers' diversions include a five-lane pool, a sun terrace beneath the retractable roof, a whirlpool, and the most chic waterslide you've ever seen (leave it to the French). 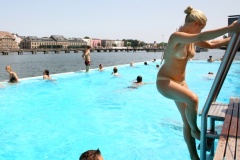 
Berliners clamber aboard the Badeschiff (literally, "bathing ship"), which floats southeast of this vibrant cultural hub's city center, in the Spree River. The 90-foot-long, seven-foot-deep, bright blue pool was created in May 2004 from a converted barge and is now open throughout the year.

Come summer, yoga classes, concerts, and movie screenings lure hipsters here to hang out on the adjacent floating wood platform, at the cafe, and on the man-made beach. During the winter, a translucent shell protects swimmers, and a pair of saunas materializes alongside the pool. 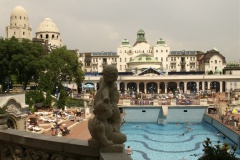 Records of the healing waters on the site of Gellért Thermal Baths in Budapest, Hungary, date back to the 15th century.
colros / Flickr


While the Gellért Thermal Baths building dates from 1918, records of the healing waters on-site date back to the 15th century. First opened with an offering of six thermal baths, the complex today is an expansive Eastern European respite decked out in intricate stonework and mosaic tiles on a grand scale.

The effervescent swimming pool in the art-nouveau-style main hall is arguably the showstopper, sparkling 98 feet long under the double-height glass roof and inevitably inspiring fantasies of swimming in champagne. The rest of the building encompasses the original mineral-hot-spring baths, plus cold baths, saunas, a steam room, a spa, and two outdoor pools, including a 130-foot-long open-air wave pool.

Affordability: Pools only from $20. 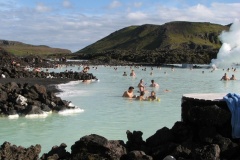 The Blue Lagoon offers a wellness center, which draws visitors from around the globe.
stoneflower / Flickr


The aptly named Blue Lagoon outside of Reykjavík draws more than 400,000 visitors a year to its 1.6 million gallons of approximately 100-degree seawater. Steam rises from these sky-blue hot springs across a surreal landscape of black lava mounds, and bathers slather themselves with silica mud, precipitated from the springwater and known for its relaxing (and purported healing) properties.

Formed in the 1970s as a by-product of the neighboring geothermal plant (after the plant used the hot water, it was led back to the lava field and formed the lagoon), the Blue Lagoon spawned a wellness center in 1999. With a restaurant, a spa, a dry sauna, and steam baths, the facility draws visitors from around the globe. 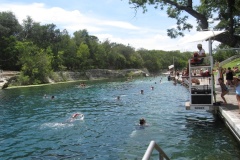 
The natural springs that feed the 1,000-foot-long Barton Springs Pool were once considered sacred by Native Americans, who believed in their healing powers. A dip in these waters is certainly rejuvenating, as is the time you'll spend lounging poolside on grassy knolls shaded by ancient oak and pecan trees in surrounding Zilker Metropolitan Park. The idyllic 355-acre green sprawl south of downtown is host to the annual Austin City Limits Music Festival and features Frisbee golf, playgrounds, and the Zilker Botanical Garden, which includes the Isamu Taniguchi Japanese Garden. 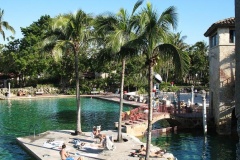 Coral Gables Venetian Pool in Florida was created in 1924 by the city's founder, George Merrick.
Courtesy of Coral Gables Parks and Recreation


Like something out of a watercolor found at a Florida antiques show, Coral Gables Venetian Pool is a man-made, jade green, eight-foot-deep lagoon created in 1924 by the city's founding father, George Merrick. Drained every night and refilled with 820,000 gallons of spring water, the pool — listed on the National Register of Historic Places — is connected to a pair of waterfalls (one of which is 25 feet high!) and grottoes worthy of Michelangelo's eye. Hold court at the poolside cafe during the afternoons; as night descends, Venetian-inspired lampposts bestow a 1920s glamour on this secluded spot, but, sadly, moonlight canoodling is deterred by closing times that precede sunset.