The World's Most Incredible Bridges

Take a trip down one of these meandering marvels for breathtaking aquatic landscapes. 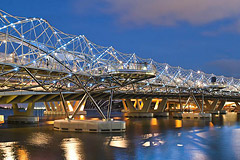 The Singapore Helix Bridge, Singapore
Courtesy of Andrew Rowat/Getty Images
More from Yahoo! Travel
Starting with simple logs from fallen trees or a few stones strategically placed across a stream, bridges and humans have had a long history. Many are designed exclusively for people on foot or on bike; others are for use by cars, boats or trains. Some bridges connect continents; others are known more for their histories and the cultural interest they inspire.

“Few man-made structures combine the technical with the aesthetic in such an evocative way as bridges” wrote David J. Brown, a bridge historian and author of Bridges: Three Thousand Years of Defying Nature. With the help of Brown, and Judith Dupré, a structural historian and bridge expert, we’ve searched the globe for incredible specimens of architecture that span physical obstacles — better known as bridges.

In Pictures: The World’s Most Incredible Bridges


The almost 1,000 foot long curved Singapore Helix Bridge connects Singapore's Youth Olympic Park with the new Marina Bay Sands integrated resort. Designed by architecture firms the Cox Group and Architects 61, and international engineering firm Arup, the Singapore Helix is the world's first bridge in the form of an interlocking double helix, and also utilizes lights to highlight its unique structure, Brown said. The bridge has viewing platforms, and also serves as a gallery. 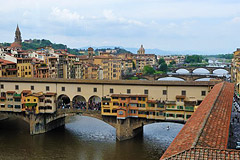 
Florence’s Ponte Vecchio (which means “Old Bridge”), crosses the Arno River, and is an inhabited bridge, common in Europe during the Middle Ages when merchants and residences occupied the space. “The Ponte Vecchio is more than a bridge. It is a street, a marketplace, a public square, and an enduring icon of Florence,” Dupré writes. Today, she said, the bridge houses gold shops and, on the top level, the “secret” Vasari Corridor that Renaissance nobility once used to cross between the Pitti and Vecchio palaces. The bridge is considered to be the first segmental arch bridge built in the West, according to the Encyclopaedia Britannica and “is an outstanding engineering achievement of the European Middle Ages.” Built in 1345, it required fewer piers than the Roman semicircular-arch design, as the shallower segmental arch offered less obstruction to navigation and freer passage to floodwaters. Its design is generally attributed to Taddeo Gaddi, better known as a painter and pupil of Giotto. During World War II, it was the only bridge in Florence spared from destruction by German bombs, because Hitler took a fancy to it. 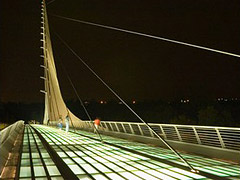 
Spanish architect and engineer Santiago Calatrava's Sundial Bridge stretches across the Sacramento River in Redding, California, linking the two campuses of Turtle Bay Exploration Park. Opened in 2004, the bridge for pedestrians and bicyclists also serves as a gateway to the Sacramento River Trail system, and its soaring backward-leaning mast with cables stretched like the strings of a harp, is a working sundial, said David J. Brown, a bridge historian and author of Bridges: Three Thousand Years of Defying Nature. The bridge is also environmentally sensitive to its setting. The free-standing construction allows the bridge to avoid impacting the nearby salmon-spawning habitat, as there are no supports in the water, yet its glass-bottom encourages public appreciation of the river, according to Turtle Bay Exploration Park. The Sundial Bridge is one of about fifty -- and the first built in the United States -- designed by Calatrava, writes Brown. 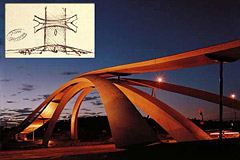 
Designed in 1502 by Leonardo da Vinci to span the “Golden Horn,” the famous waterway in Istanbul that separates Europe and Asia, the stone bridge was never built because the Turkish sultan feared that it was not technically feasible. A scaled down, laminated wood and stainless steel version based on the famous artist’s original plan is now a footbridge near Oslo, Norway. “For 500 years the beauty and symbolism of this graceful bridge remained an obscure drawing in one of Leonardo’s notebooks, until it was brought into being in Norway in 2001 by the contemporary artist Vebjorn Sand,” according to the website of The Leonardo Bridge Project, a global public arts project. Built in collaboration with the Norwegian transportation ministry, the bridge was the first civil engineering idea by Leonardo to be realized. 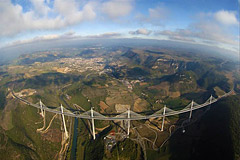 
Rising above the clouds, the Millau Viaduct is the tallest road bridge in the world, said Brown, a bridge historian and author of Bridges. With its loftiest pier higher than the Eiffel Tower, it was financed by the same company that built the famous French monument. Conceived by engineer Michel Virlogeux and designed by architect Sir Norman Foster, the cable-stayed bridge (in which the deck is supported from towers by a series of cables), comprises seven concrete piers and a steel deck, and spans more than one-and-a-half miles across the valley of the river Tarn near Millau in southern France. Completed in 2004 after only three years' construction, the Millau Viaduct was created to have the "delicacy of a butterfly," said Foster in news reports. "A work of man must fuse with nature. The pillars had to look almost organic, like they had grown from the earth," said the English architect, who was interviewed by a regional paper and quoted in a BBC news report. 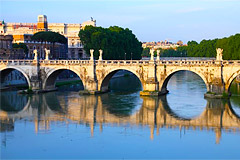 
Ponte Sant’Angelo spanning the Tiber in Rome, one of the eight stone bridges the Romans are known to have built over the Tiber between 200 B.C. and A.D. 260, is the most celebrated of the six “massive beauties” still in use, said Judith Dupré, author of Bridges. “The Romans perfected the masonry arch,” she said, allowing them to span much greater distances than previously. “Much of Roman engineering genius is underwater, hidden from view, but their inventions — including the cofferdam, cutwater piers that divide water current, and pozzolano, a type of waterproof concrete—are still used today,” Dupré said. Ponte Sant’ Angelo, originally named for Hadrian, the emperor who reigned during its construction, leads to his mausoleum, Castel Sant’ Angelo, a popular tourist attraction in Rome.

In Pictures: The World’s Most Incredible Bridges