What you need to know about the Samsung Galaxy S II 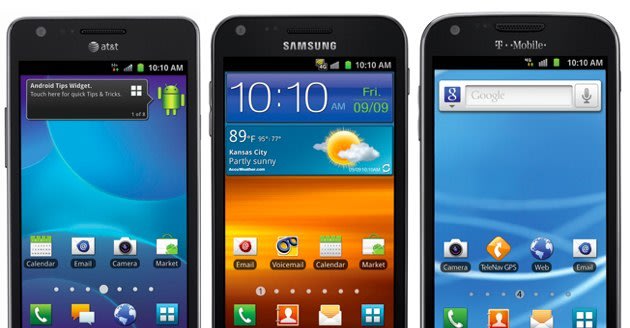 These slender powerhouse phones will soon be available across AT&T, Sprint, and T-Mobile
It seems like new Android devices come out every day — and with so many of them floating around, it's hard to get very excited about the launch of the "next great phone." But there's a new mobile lineup that's definitely worth a look: The Samsung Galaxy S II series. This trio of phones continue the smartly-designed, powerful pedigree of their predecessors — and they just might be the best phones money can buy.
But the Galaxy S II phones aren't without competition. With the anxiously-awaited Droid Bionic finally making its debut, it just goes to show that no single Android device can be king of the hill — for long, at least. Just like the new Samsung line, the Droid Bionic on Verizon touts a full set of bells and whistles — 4G and a bright 4.3" screen among them. But will Samsung's new mobile generation stay on top? We think so — read on to find out why.
Like Samsung's original Galaxy S fleet, these slick new Android smartphones will be available across carriers — this time with the exception of Verizon. The original phones, which sported flashy names like the "Fascinate" and "Captivate," were highly reviewed when they debuted almost exactly a year ago, and the Galaxy S II line aims to keep the bar high.
The original model of Galaxy S II has been available abroad for some time now, but three new variations of the phone — one on AT&T, Sprint, and T-Mobile — are about make a splashy U.S. debut.
What they have in common
Since the whole Galaxy S II pack shares most of its feature set in common, we can run through what to expect from any of the three devices, regardless of which model you might be eyeing. All three phones run Android 2.3 (the newest version of Android for phones), which means they'll offer staples of the Android experience like widgets, a high level of customization, and the Android Market's cache of apps and games. Samsung has tweaked the software a bit with its own user interface, known as TouchWiz, which offers a distinct look and some unique built-in features like an integrated task manager.
The most noteworthy (or at least eye-catching) feature of the trio might be the Super AMOLED Plus screens, which are stunningly bright and make for an extremely sharp, colorful display. Each phone is photo-ready with a built-in 8 megapixel rear-facing camera, with a 2 megapixel cam up front for video chat. All three devices can record video in 1080p HD.
The three phones will all be capable of connecting to a flavor of 4G on their respective networks — HSPA+ in the case of AT&T and T-Mobile and WiMax on Sprint. These networks offer speeds far outstripping 3G, though you'll need to have coverage in your area for that to mean much.
While they share the same bloodline and most of the same tech specs, the phones do have a few distinctions — we'll look into those next. 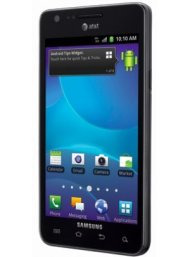 If you had fallen head-over-heels for the international version of the Galaxy S II, you'll find a lot to love in AT&T's variant. The phones share their good looks and slender, squared-off design in common. Unlike its two brethren, the AT&T Galaxy S II sports a 4.3" screen — a more reasonable size if you've got hands on the small side, or if a 4.5" phone seems a bit too beastly for your liking. At a wafer-thin 8.89mm thick, this version might squeak by as the thinnest of them all — but still not as svelte as the international version's 8.49mm. (For perspective, the famously thin iPhone 4 is 9.3mm thick.)
Beyond its silhouette, this variant is reportedly running a power-packed Samsung Exynos dual-core 1.2Ghz processor (which is lauded for gaming and graphics) and the ability to jump on AT&T's HSPA+ 4G network.
The AT&T Galaxy S II is rumored to be available on September 18, but there's no word yet on pricing. 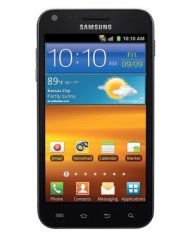 Sprint is opting to stick with a familiar naming scheme, dubbing its Galaxy S II the "Epic Touch 4G." The Epic Touch 4G's 4.5" Super AMOLED Plus screen is a step up from its 4.3" AT&T cousin, which is either a blessing or a curse depending on how sold you are on megaphones. The name probably tipped you off, but the Epic Touch 4G will be able to hop on Sprint's 4G WiMax network, which makes for a big speed boost if you live in a Sprint 4G coverage area. The Sprint version strays a bit from the original Galaxy S II that's been available overseas, and features more rounded edges. It also has one of Samsung's own Exonys processors under the hood, and with a top-of-the-line 4.5" Super AMOLED Plus screen, games and graphics should look stunning.
Sprint's Epic Touch 4G will go on sale September 16 for $199 with a 2-year contract.

T-Mobile: Samsung Galaxy S II
T-Mobile's variant shares most of the same DNA as its relatives, but is a bit closer to Sprint's version on the family tree. Like Sprint's epically-named Epic Touch 4G, the T-Mobile version boasts a massive 4.5" Super AMOLED Plus screen.
The T-Mobile Galaxy S II strays a bit further from the design of its progenitor, with curves reminiscent of the original Samsung Galaxy S line. This version will also be 4G capable, so it can speed along on T-Mobile's newly speed-bumped HSPA+ network.
T-Mobile has been a bit dodgy on the details, so pricing and a release date are not yet confirmed. The T-Mobile version is also rumored to sport a different dual-core processor than its peers, possibly to enable even faster speeds (42 MBps) on the new network.

This article originally appeared on Tecca