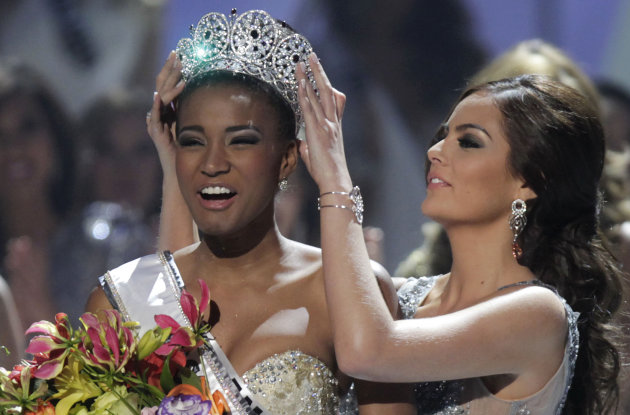 SAO PAULO (AP) — Leila Lopes from Angola was crowned Miss Universe Monday night, smoothly handling an interview question about what physical trait she would change if she could by stating it was her inner beauty and principles that counted most.
The 25-year-old Lopes is Angola's first winner. She beat out 88 other competitors to win the title during the 60th anniversary of the world's biggest beauty pageant. She replaces last year's winner, Ximena Navarrete of Mexico.
"Thank God I'm very satisfied with the way God created me and I wouldn't change a thing," Lopes said when asked her interview question. "I consider myself a woman endowed with inner beauty. I have acquired many wonderful principles from my family and I intend to follow these for the rest of my life."
The first runner-up was 23-year-old Olesia Stefanko of Ukraine and the second runner-up was Priscila Machado of Brazil. The third was Miss Philippines and the fourth Miss China.
Contestants from 89 nations on six continents spent the past three weeks in Sao Paulo, trying to learn samba dance steps, visiting impoverished children and kicking a football around for cameras as the globe's biggest beauty contest is held in Brazil for the first time.
"It was well deserved, we were cheering for her all along," said 36-year-old Sao Paulo resident Carolina Rocha, a fan who attended the event. "Her smile and her friendliness was what set her apart from the others. She also answered her question very well, that likely helped her a lot."
Before the contest began, judges offered little insight into who they thought might win.
"I know my job and I'll be tough, but fair," said pageant judge and journalist Connie Chung. "You have to keep in mind that these women are not objects just to be looked at. They're to be taken seriously. I want to choose somebody I take seriously and the world takes seriously, too."
Paula Shugart, president of the Miss Universe organization, was hyped for the night.
"It's our 60th anniversary, it's a very big show," she said. "We're anticipating close to a billion viewers from around the world."
Shugart said it was fitting the globe's biggest beauty pageant be held in Brazil at this time, as the nation prepares to host some major events in the coming years.
"I don't think there is any doubt in the rest of the world's mind that Brazil is the place, between hosting the Olympics and hosting the World Cup," she said. "I love the fact we're going to kick it off. I always say we're the 'World Cup' of beauty."
The contestants, who must never have been married or had children and who must be at least 18 years of age and under 27 years of age by Feb. 1 of the competition year.
The pageant, hosted by NBC "Today" anchor Natalie Morales and the Bravo network's Andy Cohen, will air live on NBC and be distributed to about 170 countries. The contest is co-owned by Donald Trump and NBC, and will be judged by celebrities including Connie Chung, supermodel Isabeli Fontana and Indy race car driver Helio Castroneves.
Morales, who is half Brazilian, said that "what's most important is for the women to be beautiful inside and out."
For Cohen, the task of hosting is an easy one.
"It's a fun job. All I have to do is stand there, smile and scream the names of countries," he said.
Sharply dressed women and men were jostling for chances to have their photos taken with stars on the red carpet. Some traveled from across the globe to support contestants.
Jehona Dreshaj, 17, arrived from Kosovo to cheer on her sister, Aferdita Dreshaj, who is representing the European country.
"It doesn't really matter the outcome, she is already a winner in our eye and we are so proud of her," she said. "This has been an incredible experience for her and for all of us. It's great for her to be representing our country in an event like this"
There have been no headline-grabbing gaffes going into this year's competition, as opposed to past years that have seen controversies of various stripes. The show itself went off without a hitch.
Some of the contestants have complained to the local news media about the size of bikinis used in some photo shoots, with Miss Mexico Karin Ontiveros saying they were "very small."
That was enough to draw chuckles in Brazil, where women from all walks of life, not just beauty queens, sport barely there swimwear on beaches throughout the country.
Miss USA Alyssa Campanella, from California, will be trying to end a long losing spell for the U.S. in the competition. An American has not been named Miss Universe since Brook Lee won the title in 1997.
The pageant started as a local bathing suit revue in Long Beach, California, organized by a swimwear company.
___
Associated Press writer Tales Azzoni contributed to this report. 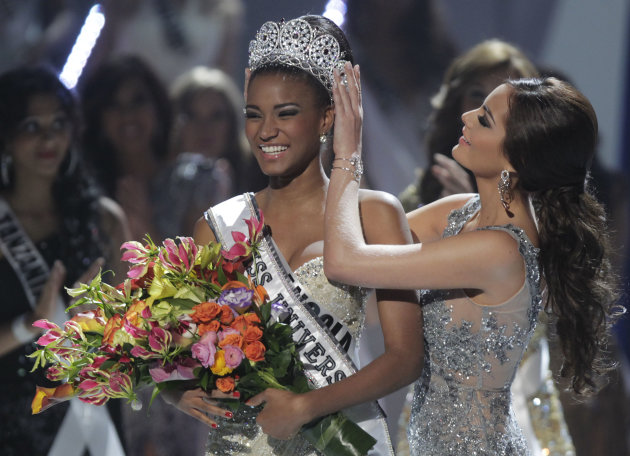