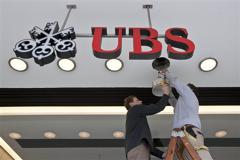 FILE - The Oct. 7, 2010 file photo shows workers repairing a lamp at the UBS bank in Zurich, Switzerland. Swiss bank UBS AG said Thursday, Sept. 15, 2011 it has discovered that unauthorized trading by one of its staff has caused an estimated loss of US$2 billion (1,453 billion euro) and warned it could result in a loss for the entire third quarter. (AP Photo/Keystone, Alessandro Della Bella) GERMANY OUT AUSTRIA OUT