Ashton Kutcher replaces Charlie Sheen on Two and a Half Men 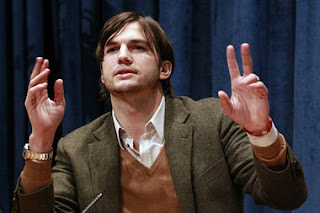 Ashton Kutcher speaks during a news conference at the United Nations Headquarters in New York in this November 4, 2010 file photo. Kutcher will join the cast of top-rated TV comedy Two and A Half Men, replacing fired star Charlie Sheen.
Brendan McDermid/Reuters/File

New York
Ashton Kutcher, who launched his career with That 70's Show, followed by Punk'd, has landed Charlie Sheen's old spot on TV's most popular comedy, Two and a Half Men.

.After months of speculation as to whether the show would go on without Sheen, and who might replace him, on Thursday night Kutcher simply tweeted: (-;

Confirmation came on Friday that Kutcher finalized his contract to appear on Two and a Half Men next season. He went to Twitter to thank his fans.

"Thank you for all the Congrats on 2.5. Met with the team this morning.... We are already working on earning your Laughter," Kutcher Tweeted.

Before Kutcher snagged the role, Briton Hugh Grant was said to have almost won the contract, but CBS, studio Warner Bros. ended negotiations with Grant, and soon found Kutcher.

Was Charlie Sheen ready with a profanity-laced retort to CBS's decision to continue the show? The ex-2.5 actor was surprisingly soft when he told TMZ that "Kutcher is a sweetheart and a brilliant comedic performer... Oh wait, so am I!!" Though he still hasn't forgiven the show's creator, Chuck Lorre. In reference to Lorre, he said "Enjoy planet Chuck, Ashton. There is no air, laughter, loyalty, or love there."

Kutcher was quick to reply to Sheen's "sweetheart" comment, and tweeted, "@charliesheen Thank man. Always been a fan, always will be! BTW you were 'born big'"

Kutcher is an active Twitter user, and was the first to gather one million followers on the social media site. The actor and his wife, Demi Moore, are celebrity philanthropists and they have been known to donate millions to charity in both traditional and untraditional ways. In 2006, he offered to donate $1 million to Habitat for Humanity for every 50,000 MySpace users who "friended" him, while more recently, in 2011, he offered tours of his house in return for donations to his and Moore's charity, the DNA Foundation.

Posting source: http://www.csmonitor.com/The-Culture/TV/2011/0514/Ashton-Kutcher-replaces-Charlie-Sheen-on-Two-and-a-Half-Men
Posted by Freelance at 2:35 AM