Palin has not yet disclosed her intentions


Several fancied Republicans may have ruled themselves out of the 2012 race for the White House but one woman could yet ignite the campaign, says the BBC's Jonny Dymond in Washington DC.
With one announcement, the slow burning - some might say barely-smouldering - Republican campaign for the White House has, if not caught light, then at least caught the attention of those outside the circle of Washington's campaign professionals.
That announcement was from Sarah Palin's Political Action Committee; the former vice-presidential candidate would, the PAC said, begin a tour of north-eastern states, visiting historic sites and patriotic events.
The aim of the "One Nation tour", she said on her website, will be "to connect with our founders….to clearly see our way forward".
Until this point, most of the noise in the Republican camp had been made by those saying they aren't going to stand - three former and present state governors have ruled themselves out, as did the extrovert property developer and television star Donald Trump.

Some of those in the frame

Seasoned campaign watchers are surprisingly united on why they think so many have ruled themselves out of the 2012 race for the White House.
It is, many say, because potential candidates cannot face the sheer grinding ghastliness of the campaign.
"I think in America," says Rich Galen, a former Republican campaigner, "we have successfully dumbed down the process so that good people don't want to put themselves through this anymore."
He's not just referring to the long months of cheap hotels, bad food, begging for campaign funds and forensic scrutiny from opponents and the media.
There's also the loss of income - candidates cannot use campaign funds for personal use - and the impact upon family.
"Good people over time decide 'you know what? I don't need this, my family doesn't need this, the country will do just fine and I'll go out and make some money.'"

Presidents get the credit for good times, whether they actually produce them, and they get the blame for bad times”

Professor Larry Sabato University of Virginia
When the BBC spoke to Sarah Palin a couple of months ago about what might sway her decision as to whether she might run, the first thing she mentioned was the current occupant of the White House.
"Well, understanding that Obama has already said that he's going to rake in and spend a billion dollars in this race, money is certainly going to be a consideration."
The president's fundraising machine - and his acknowledged abilities as a campaigner - would make anyone think twice about devoting the next year and a half of his or her life to trying to unseat him.
And there is the power of incumbency; in the last 30 years, only one sitting president has failed to win a second term.
So, might Republicans be smart in thinking that they should just sit this one out? Maybe not, says Professor Larry Sabato of the University of Virginia.
"About 70% of the time the incumbent seeking a second term is elected," he says. "You would rather have those odds than not. 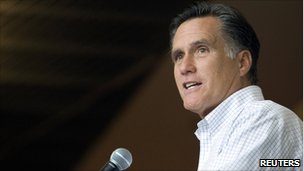 Mitt Romney is a frontrunner
"But in the 30% of the time that the incumbent loses, it is because he is held accountable for what has happened on his watch.
"Presidents get the credit for good times, whether they actually produce them, and they get the blame for bad times, whether they are responsible or not."
So all the money and all the fine speeches may not be enough if President Obama is faced with a decent opponent, because America is still hurting - unemployment is still around 9%, wages are stagnating, economic insecurity is high.
There is, says Republican pollster Whit Ayres, a deep sense of unease.
"Two thirds of the people in the country think we are going in the wrong direction.
"It is," he says, picking his words carefully, "a challenge for an incumbent president to get re-elected when two thirds of the people in the country think that we are going the wrong way, we are off on the wrong track and things are not going well.
"If only a third of the people like the direction of the country, that's a problem for him."
Republicans - and senior Democrats - are convinced that President Obama can be beaten.
The time for Republicans to rule themselves out is over; the campaign for the Republican nomination is about to begin.