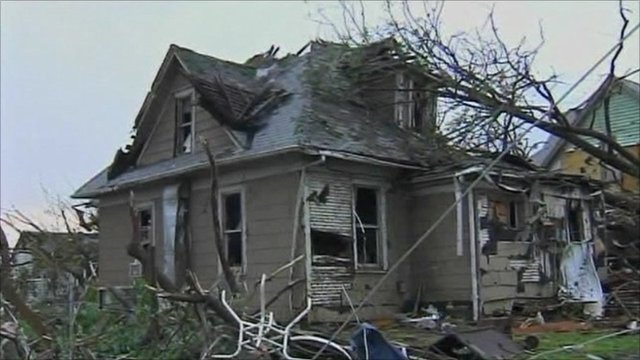 Click to play
Video footage showed the tornadoes and their aftermath
The first funeral of a confirmed victim of last Sunday's devastating tornado in the city of Joplin in the US state of Missouri has been held.
It came as the death toll from the tornado - the deadliest in more than 60 years - rose from 125 to 132, local officials said.
But they say a new list of 232 missing has dropped to 156 after dozens of people were accounted for.
Rescuers with dogs are continuing their search for more survivors in Joplin.
"We're going to be in a search and rescue mode until we remove the last piece of debris," city manager Mark Rohr was quoted as saying by the Associated Press news agency.
The tornado, with winds reaching 200mph (322km/h), injured more than 900 people and wrecked as much as a third of the city, making it one of the most destructive in US history.
Another series of tornadoes struck Oklahoma, Arkansas and Kansas on Tuesday and Wednesday, killing at least 16 people.
Slow identification On Friday, hundreds of mourners gathered in a church in Galena, just over the Kansas border, for the funeral of Adam Dewayne Darnaby - one of the first confirmed victims of the tornado in Joplin.
During the service, Mr Darnaby was described by his friends as a devout Christian, who was "too busy living".
He died just four days short of his 28th birthday. 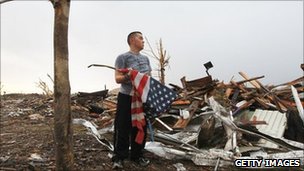 Joplin residents say they are determined to rebuilt the city
At least 19 bodies have been released to their families and relatives, but many bodies are yet to be formally identified - much to the distress of relatives and friends, who are angry at the delay.
The authorities stress that, wherever possible, they prefer to base identifications on DNA, medical records and also distinguishing features such as tattoos and piercings.
"It is important that we be absolutely accurate in this process," said Andrea Spillars, deputy director at the Missouri Department of Public Safety.
This comes after a woman reportedly misidentified one victim as her son in the chaotic hours after the tornado hit.
Department spokesman Seth Bundy said 90 people on its list of unaccounted had been found alive.
But he added: "Are there individuals who are on the missing list and in fact deceased and in the morgue? Yes. How many, I won't speculate."
US President Barack Obama plans to visit Joplin - home to 49,000 people - on Sunday to take part in a community memorial service.
City officials have already sent a request to the federal emergency agency for assistance in removing the rubble.