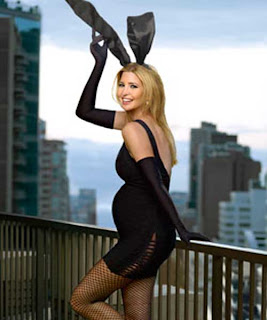 In the latest issue of Harper's Bazaar Ivanka Trump -- daughter of a man who will NOT be launching a campaign for the presidency -- shows off her trim, stylish baby bump.

"Ivanka will be an amazing mother," says that dad, Donald Trump. "She's totally brilliant. She's got great beauty, but it's really highlighted by the fact that she is a very smart person. It's a combination you don't see very often. [I hope] my granddaughter will be as much like Ivanka as possible."

Ivanka's child -- a daughter -- is due in July. She and husband Jared Kushner stuck to a plan to spend a year together as newlyweds before starting a family.

"Jared is ecstatic," says Trump. "She'll be a daddy's girl. I have a feeling they are going to gang up on me."

Trump also adds that she's had a remarkably easy pregnancy -- no morning sickness, no cravings -- before going on to critique President Obama, who she says has "proven to be a very ineffective leader."