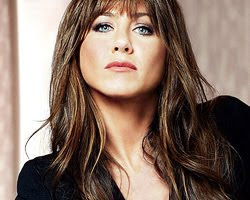 Jennifer Aniston has made a career out of playing good girls. Heck, she even played the title role in a movie called, you guessed it, "The Good Girl." So, it's no surprise that people have noticed Aniston's role in the upcoming flick, "Horrible Bosses" breaks the trend. She plays a dentist who is annoying, inappropriate, disrespectful... in short, anything but good.

The comedy, which co-stars Colin Farrell, Kevin Spacey, and Jason Bateman, features a new look for Aniston. For the first time in a long time, she won't rock blond hair. She's dyed her hair dark brown, a not-so-subtle sign that her character is bad to the bone. Even the movie's poster refers to her as a man-eater.

But it's not just Aniston's hair that has people talking. It's the role, too. In the film, Aniston plays a dentist who sexually harasses her helpless underling, played by Charlie Day of "It's Always Sunny in Philadelphia."

'Horrible Bosses'New Line Cinema In the trailer, which is not safe for the young 'uns, Aniston goes completely over-the-top with her harassment, which Day's character can't stand. He and his friends, played by Bateman and Jason Sudeikis (who both also have "horrible bosses"), decide to take things into their own hands by offing the bosses with the help of a "murder consultant" played by Jamie Foxx.

While Aniston's new look is garnering the lion's share of attention, the film is also hot on the Web. Over the past week, searches on "horrible bosses" and "horrible bosses trailer" are both up over 400%. And, in a sign that is sure to please the studio's bean counters, Web searches for "horrible bosses release date" are on the up and up.

The film (and, with it, Aniston's new hair) hits theaters on July 8.