On Wednesday night, a new American Idol was crowned. Congrats, Scotty McCreery. But this news was actually anti-climactic compared to everything else that occurred in the 117 minutes leading up to Ryan Seacrest's big announcement. If anything, there were so many great performances by the contestants who didn't make it to the finale, it was enough to make viewers wonder if they'd voted wrong when they elected the final two. Perhaps this was not the agenda "Idol" producers had in mind when they planned this show...but their loss was our gain, because we were all treated to a night of fine Idolicious entertainment.

Here were the night's biggest highlights:

8) Jennifer Lopez Proves She Should Be A Judge On "SYTYCD" Instead
Any viewers who saw J.Lo and her admittedly more vocally gifted husband Marc Anthony duet at the 2005 Grammys were probably relieved that J.Lo refrained from singing when Marc performed on the "Idol" finale, instead just doing what she does best: Shaking her famous moneymaker like a Fly Girl. Still, it was a little weird that the singing judge of a singing competition only DANCED, and didn't bother to come within 10 feet of a working microphone.

7) No One Is Harmed In The Making Of The "Spider-Man" Performance
When an aerial stuntman in Spider-Man spandex, suspended only by skinny strings, hovered above the audience, my heart stopped, imagining another Julie Taymor-style disaster like the "Idol" stage collapsing on top of J.Lo's million-dollar-insured legs or whatever. But instead U2's Bono and The Edge, and Turn Off The Dark Broadway star Reeve Carney, performed the musical's soundtrack single "Rise Above" without a hitch. I would have preferred another Rock Of Ages cast performance, myself, but this sounded like a solid U2 ballad, and everyone emerged unscathed, so I was pleased. And relieved. 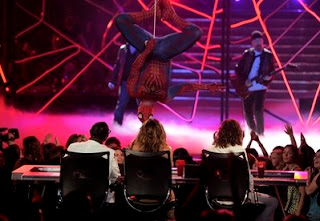 6) Casey Abrams & Jack Black Have A Growl-Off
I never thought I'd see the day when Jack Black would be upstaged. But he met his match in Season 10 growler Casey, who out-scatted him on a bizarre but amusing cover of Queen's "Fat-Bottomed Girls," while a bunch of modern-day Fly Girls in short-shorts gyrated behind them. It was more like Bodacious D than Tenacious D. It was also pretty awesome. 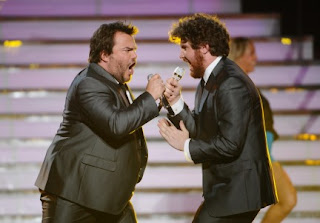 5) Lady Gaga Returns To Scare The Judas Out Of Scotty & Lauren
The season's two young and impressionable finalists probably still wake up with night sweats remembering that time they were locked in a rehearsal room with mentor Lady Gaga and ordered to act "evil" and French-kiss microphone stands. When Gaga hit the finale stage in a metal-studded bikini, rubbing up against "So You Think You Can Dance" allstar Mark Kanemura on a giant rock, then jumping into a hellpit Black Swan-style, it was a tame performance by Gaga standards...but I bet Scotty kissed his cross again anyway. 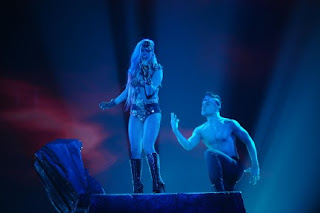 4) The Great Debate: What Was This Season's Most Shocking Elimination?
Casey Abrams claimed his top 11 elimination night was this season's biggest shocker, and he made a good case (he did need medical attention afterwards). James Durbin claimed his top 4 night was the season's biggest upset (he cried, after all). Then Pia Toscano sashayed up in her "Most Shocking" beauty-pageant sash and claimed her rightful title. Seeing these Idols reenact the debates we've all engaged in around the ol' watercooler was a total blast. (And by the way...I sided with Casey.)

3) Beyonce & The Top 13 Girls Run The World
Okay, WHY didn't some of these girls perform this well WHEN THEY WERE COMPETING ON THE SHOW? Belting out a Beyonce medley, Thia and Pia oozed personality, Karen Rodriguez showed vocal range, Haley Reinhart proved she should have been in the finale, and Naima Adedapo, the dancer of the season, totally busted a move in her freakum dress. Then Beyonce joined the single ladies and things got even freakier. The one bittersweet moment? When they sang "If I Were A Boy" and I thought the full title should have been "If I Were A Boy (I Probably Would Have Gone Farther On This Show)." Come on, you know it's true. Girls may run the world, but they don't run "Idol." 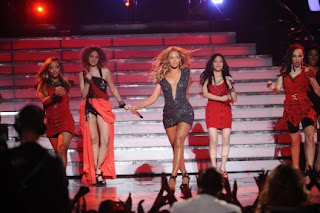 2) Steven Tyler Reminds Everyone He's A Rock Legend
He plays the class clown on "Idol," but never forget Steven Tyler is a ROCK GOD, people. There's more to him than wacky one-liners, inappropriate flirting, and colorful scarves. His "Dream On" performance was a welcome reminder of his legacy, and on an even happier note, it forever erased Danny Gokey's infamous "Dream On" Season 8 performance from viewers' scarred brains. It was beautiful, man. Just beautiful.

1) James Durbin & Judas Priest Give Metal A Chance
A couple weeks ago when James was eliminated, I lamented what could have been, imagining "James rocking the stage sheathed in Rob Halfordian leather" on the finale if he'd advanced. But I ended up not only getting my wish...I got James rocking the stage WITH ROB HALFORD. Watching James live out his Beavis & Butthead-esque rock 'n' roll fantasies, engaging in a headbanging Judas Priest screech-off on "Living After Midnight" and "Breaking The Law" (as "Pepsi Moment" pyro flames shot up to the ceiling and James's tail-scarf wagged in earnest) was such a righteously rawkin' antidote to the scrubbed-cleaned final two's safe, grandma-friendly performances. And did James borrow that studded vest from Gaga?

Also see: http://new.music.yahoo.com/blogs/realityrocks
Posted by Freelance at 5:53 AM