By DAN ELLIOTT, Associated Press / May 25, 2011
New spaceship from NASA: a new spaceship based on an Orion space capsule is being re-purposed for missions to astroids and moons around Mars. 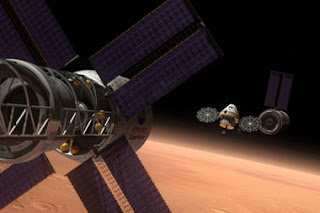 New spaceship coming from NASA: an artist's rendering of the Multi-Purpose Crew Vehicle on a deep space mission.
Photo illustration/NASA


NASA's announcement of a new role and name for the Orion space capsule was welcome news in Colorado on Tuesday, where about 750 Lockheed Martin employees, subcontractors and suppliers are working on the project.
Skip to next paragraph

Orion was originally part of the Constellation program, former President George W. Bush's plan to return humans to the moon. President Barack Obama scrapped that project but spared Orion for possible use as an escape pod for the space station.


IN PICTURES: Space photos of the day - NASA mission posters

NASA said Orion would be used to carry four astronauts on 21-day missions outside Earth's orbit, possibly to an asteroid. On return, it would land in the Pacific Ocean.

NASA is renaming it the Multi-Purpose Crew Vehicle.

Design and engineering work on the capsule is being done by Lockheed Martin at two locations in the Denver area, in suburban Lakewood and in Waterton Canyon south of Denver.

Final assembly on a ground test version is also under way in Colorado.

The company showed off that spacecraft in March, along with a $35 million, 41,000-square-foot building where full-size mock-ups of the space station and the front section of the Orion can be used to practice docking maneuvers.

About 600 Lockheed Martin employees in Colorado are working on the project, along with about 150 subcontractors and suppliers, company spokeswoman Joan Underwood said. The company is based in Bethesda, Md.

NASA awarded Lockheed Martin a $7.5 billion contract in 2006 to build Orion. NASA said about $5 billion has been spent.

NASA hasn't said what the space capsule's destination might be, and the rocket that would carry it hasn't been designed.

When it unveiled the test capsule in March, Lockheed Martin said it could first explore the far side of the moon, then land humans on asteroids and eventually take them to one of the moons of Mars.

"This is great news for Colorado," Bennet said.

Posting source: http://www.csmonitor.com/Science/2011/0525/New-spaceship-to-take-astronauts-to-astroids-Mars-moons
Posted by Freelance at 2:29 AM