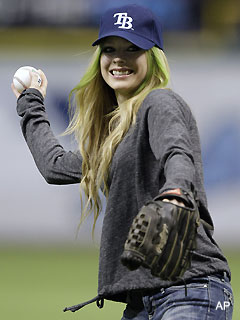 Chill out, what ya yelling for?
That's the question that the embarrassed Tampa Bay Rays should have thrown back at Avril Lavigne after the punk rawker let loose some profanities during the team's summer concert series at Tropicana Field on Saturday night.
Instead the red-faced Rays just apologized directly to their fans in a statement on Sunday.
Said spokesman Rick Vaughn (via The Heater):


"The Rays demand profanity-free performances from all of our concert performers and we are extremely disappointed by the language used in last night's show. It is not consistent with the family-friendly atmosphere that Tropicana Field is known for."

So what was Lavigne yelling for? Was it because the native Canadian still has a soft-spot for her Blue Jays and the Rays lead them in the current AL East standings? Was she suffering from withdrawal from her normal mall habitat of Hot Topics and Orange Juliuses? Good guesses, but no.
In reality, her salty language was reportedly aimed at the fans who booed the technical difficulties — notably, a dead microphone — that occurred during the singer's first song.
Between her swear words, Lavigne reportedly noted that live shows — especially those at a "baseball stadium" — have a tendency to feature a few glitches. As someone who suffered through bad sounds at George Thorogood's set after a Pittsburgh Pirates game last August, I can attest to that. (I also would have cheered anything that blocked Lavigne's music from being disseminated further, but that's just me.)
Still, Avril should have known better because this was a family atmosphere the Rays were paying her to perform at. And it was filled with the very same families that Lavigne and her marketing companies have targeted over the past decade by being just the right kind of punk rawk dangerous (which is, to say, usually not dangerous at all).

Were the words she uttered probably any worse than the kids in the expensive seats can hear from the ballplayers on the field? Probably not, but she could have dropped a quick "earmuffs!" before her tirade.
Posting source: http://sports.yahoo.com/mlb/blog/big_league_stew/post/Rays-apologize-to-fans-for-Avril-Lavigne-8217-s?urn=mlb-wp8118
Posted by Freelance at 1:53 AM