Whatever Happened to Phoebe Cates? 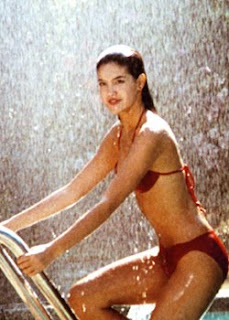 This year marks the 65th anniversary of the two-piece bathing suit, commonly known as the bikini. Inventor Louis Reard called his creation a bikini in honor of America's first nuclear test in the Pacific, which took place near the Bikini Islands. According to an article from the BBC, the French engineer assumed that his scandalous new suit "would cause a similar explosion" once it hit the mainstream. It did.

Now the two-piece is everywhere, including, of course, Hollywood. Rare is the film that doesn't feature at least one bikini-clad starlet romping in the surf. Perhaps the most famous scene in which the bikini plays a starring role came in the 1982 comedy classic "Fast Times at Ridgemont High." Actress Phoebe Cates wears a red two-piece while lounging at her friend's pool after school. Though the film is nearly 30 years old, online interest in the iconic scene remains red-hot.

Over the past week, for example, Web lookups for "phoebe cates" jumped 17% and related queries for "phoebe cates today" also surged. Information on Cates's current whereabouts is surprisingly scant. One of Hollywood's brightest stars in the '80s, she hasn't appeared in a movie since 2001, when she had a role in "The Anniversary Party" opposite her "Fast Times" co-star Jennifer Jason Leigh. 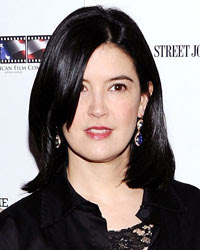 Cates's absence from the big screen was a conscious decision; she wasn't forced out of Tinseltown or anything. She is married to Oscar-winning actor Kevin Kline (who also appeared in "The Anniversary Party"), and the couple has several children. The two met while Cates was auditioning for a role in the 1983 hit film "The Big Chill." She didn't get the role (Meg Tilly did), but she did go on to appear in the mega-hit "Gremlins."

Today, Cates focuses her energy on her business. In 2006, the actress opened a boutique in New York called Blue Tree. According to an article from ABC News, the shop specializes in "often unexpected" gifts. A Yelp reviewer calls the high-end shop a "museum of cool."