Did Lauren Alaina almost drop out of the 'American Idol' finale? Her music coach gives EW the scoop -- EXCLUSIVE

by Adam B. Vary 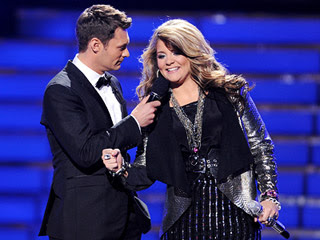 There was a lot of talk before tonight’s American Idol finale that the match up between Lauren Alaina and long standing front runner Scotty McCreery was low on real drama. That is, until an hour before the show was due to broadcast live to the east coast, when several Web reports surfaced claiming Lauren Alaina had fallen ill and second runner up Haley Reinhart was rehearsing to possibly replace her. As viewers of tonight’s show witnessed, Lauren did not have to drop out of the competition, but Idol‘s on site physician did report on the air that she “blew out one of her vocal chords” during rehearsal, and that he “gave her a lot of medicine” to help her perform tonight.

So what happened? EW spoke exclusively with Idol associate music director and arranger Michael Orland backstage after the show. Orland, who has worked with Lauren all season, explains what went down as the Idol judges and crew realized just how shaky Lauren’s voice had become.

ENTERTAINMENT WEEKLY: So the evening started out with a lot of drama. What happened?
MICHAEL ORLAND: Lauren came off [the stage] this morning, and she said, “I’m not going to sing any of my notes.” I said to her, “Just sing one note so I know you have it, and then you can mark the rest.” So she marked all the ones at rehearsal today.

What does that mean, “mark” the note?
Just not hit it out full. Just hit it once, know you have it, and then you can just kind of whisper in your head voice, not, like, belt it out. So we did that, and she was fine.

She got out to dress rehearsal, in front of the judges, and Debbie, our stage manager, said, “Lauren is not going to sing out on this one.” I thought this could be dangerous, because, you know, the judges are sitting there, and I don’t want them to get some kind of preconceived notion of what is going to be [happening] tonight. So I went up to the judges right away and said, “Don’t worry, she’s saving it, she will have it tonight, she’s going to be fine.” They were like, “Tell her to relax.” Because right away, I know in Lauren’s head, she’s going to be thinking, “Oh my God, the judges are going to be freaked out.” The judges were like, “Tell her not to worry. Tell her to save it all for tonight.”

So I went up there and said, “You’re fine. The judges are fine. Save everything for tonight.” She says, “I don’t have anything to save. There’s nothing coming out right now.”

Listen: I’ve done 10 finales [and] I have seen this [before]. I saw Jordin Sparks have no voice the day of the show. Katherine McPhee, David Archuleta [too] — it just happens. These guys have not stopped singing [all season], and they’re rehearsing for the finale [on Wednesday]. She’d just had had it. So the doctor came and saved the day. That happens to even the biggest stars in show business.

How did Idol‘s on site doctor save the day?
I think he gave her something to un-swell her vocal chords.

Like a cortisone shot?
I don’t know exactly. I don’t know about the physiological part of it, but whatever he gave her, it just numbs the vocal chords a little bit so she can get through it. I only know what the doctor said [on stage].

There was even a report that Haley Reinhart was rehearsing to replace Lauren.
Right. I mean, they have a big show to put on. I think that if she couldn’t sing any notes, they would have had to put Haley in there. I don’t think she got to actually rehearse with the band. But I wasn’t there, so I really can’t say. However, the doctor came and said, 45 minutes before they went on, [Lauren] is going be totally fine and she will be able to sing through this. But I saw it was already on TMZ — word gets out quick around here!