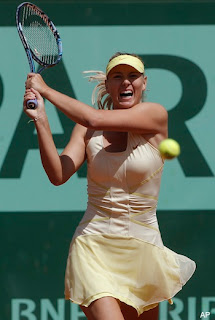 Sharapova cruised to an easy 6-3, 6-0 victory in her first-round match over Mirjana Lucic while wearing the new garment, which features stitching meant to evoke the iron lattice design of the tower that dominates the Parisian skyline.

The 24-year-old Russian entered Paris as the No. 7 seed and was fresh off the biggest clay court victory of her career in Rome, a win which made her one of the favorites at Roland Garros. With a solid performance against Lucic, she did nothing to alter expectations.

In the early rounds, at least, the dress was the showcase. Nike says it's lightweight and breathable, features a diamond shape in the back for flexibility (also a nod to Sharapova's recent engagement?) and a two-layered skirt or jersey and mesh to help movement. It's the best look Sharapova has had at a major in years. There's something about the yellow against the red clay that pops.

Posting source: http://sports.yahoo.com/tennis/blog/busted_racquet/post/Photos-Maria-Sharapova-8217-s-Eiffel-Tower-ins?urn=ten-wp876
Posted by Freelance at 5:09 AM