Is This The Year The Atchafalaya River ‘Captures’ The Mississippi? 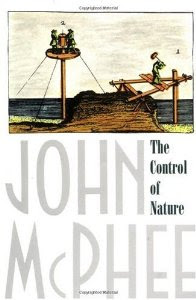 John McPhee's 'The Control of Nature.'

If you want to better appreciate the historic significance of the 2011 Mississippi flood, perhaps the best place to start is with John McPhee’s masterful 1987 article in the New Yorker: “Control Of Nature: Atchafalaya.”

The most compelling part of McPhee’s piece (which prints out at 55 pages and later became a book!) is the section where he describes the flood of 1973, the last time the structures holding back the river were put to the test, and when they nearly failed–the river scouring away concrete foundations and weakening vital levees. McPhee’s conclusion: it’s only a matter of time until the Atchafalaya “captures” the main stem of the Mississippi and becomes the new outlet of the great river to the Gulf of Mexico.

Could it happen this year? The U.S. Army Corps of Engineers is forcing the river down a path it no longer wants to travel. Had the river gotten the best of the engineers in 1973 the Mississippi would not be the same river today–it would have forced a new path down the Atchafalaya basin, a course that is some 20 feet lower than the river’s current main stem, and which offers a 150-mile shorter path to the Gulf of Mexico. Its course has changed dozens of times over the millenia, “sweeping back and forth like a garden hose,” and will change again. You can see a beautiful map of the river’s countless meanders here, and download a full set of historical maps here.

McPhee spent months trying to understand the centuries of engineering prowess that have gone into trying to control the Mississippi, especially the creation of structures much in the news today, like Old River Control and the Morganza Floodway, which was opened over the weekend to allow floodwaters to course down through the Atchafalaya basin.

The corps has had a generation to strengthen its defenses since then, but there remains today more than a theoretical chance that 2011 could be the flood where the Mississippi finally decides to go the way it wants to go rather than stays within the bounds that man has chosen for it. Once freed, all the sandbags and bulldozers in the world would be insufficient to put it back where it is. The effect on the U.S. economy of a shift in the Mississippi’s path would be significant. On the river between Baton Rouge and New Orleans sit dozens of industrial sites, processing agricultural products, making chemicals, refining 13% of the nation’s gasoline (see an excellent map of refineries here). Of these, Alon’s Krotz Springs refinery in the Atchafalaya basin is at greatest risk of inundation, while ExxonMobil has closed two pipelines and scaled back production at its refinery, the biggest in the region. Upstream in Memphis, Exxon closed a riverside terminal that has “become part of the river.”

These plants need the fresh water flow from the river for cooling, processing, and to ship their product out to the Gulf. For the health of the greater U.S. economy, we should all want the Mississippi to stay within its banks. Whether it does or not depends most prominently on the sturdiness of the Old River Control Structure, which Jeff Masters of Weather Underground calls America’s Achilles Heel. We won’t know if it’s about to fail until it does.

It’ll probably hold; auxiliary gates were built in 1986. But if it doesn’t? Well it would almost certainly mean the demise of Morgan City. As you can see on this really excellent map of the flood region, Morgan City lies on the banks of the Atchafalaya River. Though it’s protected by levees now that will hopefully hold up amid the deluge now being released down the Atchafalaya, when the day comes that the Mississippi jumps its banks for good, Morgan City would likely be obliterated and, in time, a new complex of refineries and chemical plants built on the banks of a new Mississippi.
Posted by Freelance at 1:45 AM