Michelle Obama on her “cute” husband, Hillary Clinton and how she raises her daughters

While President Obama was delivering a speech to the British Parliament on Wednesday, First Lady Michelle Obama used a visit to a prestigious girls school to give a rare glimpse into her life in the White House.

In prepared remarks followed by a Q&A at the Elizabeth Garrett Anderson School, she talked about what made her attracted to Obama and how she raises her daughters--as well as Hillary Clinton and whether the U.S. is ready for a woman president:
[ For complete coverage of politics and policy, go to Yahoo! Politics ]

On whether she knew Obama would be president when she met him: "Absolutely not. No, I'm just kidding.... I knew he was a special person. And it had nothing to do with his education. It had nothing to do with his potential. And I say this to young women: Don't check off—there are a lot of women who have the boxes. Did he go to the right school? What is his income?"It was none of that. It was how he felt about his mother; the love that he felt for his mother; his relationship to women; his work ethic ... he wasn't impressed with himself. And he was funny. And we joked a lot. And he loved his little sister ... he was a community organizer. I really respected that.

"It was those kind of values that made me think you don't meet people like that often. And when you couple that with talent, and he's cute—you know, I always thought he would be useful. But I had no idea he would be president. I didn't think he was going to be president until the night we were standing on the stage and he actually won. I was like, 'gosh, look, you won.' "

Click here to see photos of the Obamas' U.K. trip 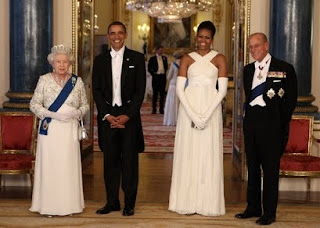 On what she and Obama tell their daughters to help them achieve their goals: "Read, write, read, read. If the president were here--one of his greatest strengths is reading. That's one of the reasons why he's a good communicator, why he's such a good writer. He's a voracious reader. So we're trying to get our girls, no matter what, to just be--to love reading and to challenge themselves with what they read, and not just read the gossip books but to push themselves beyond and do things that maybe they wouldn't do.

"So I would encourage you all to read, read, read. Just keep reading. And writing is another skill. It's practice. It's practice. The more you write, the better you get. Drafts--our kids are learning the first draft means nothing. You're going to do seven, 10 drafts. That's writing, it's not failure, it's not the teacher not liking you because it's all marked up in red. When you get to be a good writer, you mark your own stuff in red, and you rewrite, and you rewrite, and you rewrite. That's what writing is."

Advice for women on relationships with spouses and with each other: "Do not bring people in your life who weigh you down. And trust your instincts ... good relationships feel good. They feel right. They don't hurt. They're not painful. That's not just with somebody you want to marry, but it's with the friends that you choose. It's with the people you surround yourselves with. And that's just as important as the school that you choose. Who's in your life, and do you respect them, and do they respect you? And are you respecting them. Right?

"And we as women in particular—and this is such an important message—starting today, you all have to be supportive of each other. You can't be jealous, and push and trip, you know? It's hard enough."

Her concerns on attending Princeton University: "Well meaning but misguided people sometimes questioned whether someone with my background could succeed. I had all kinds of worries and fears and doubts before I entered. I worried that I wouldn't be as well prepared as students who had come from more privileged families. I worried that I wouldn't fit in somewhere so different from where I'd grown up.

"But after a few months in college, away from home on my own, I realized that I was just as capable and I had just as much to offer any of my classmates. I realized that if I worked hard enough, I could do just as well as anyone else."

On whether the U.S. was ready for a woman president: "I think we're there. I think that the United States, I think many countries around the world are ready. So now the challenge is our preparation as women and our desire and willingness to step up and grab that ring, because we're at a time when so many people just want good leadership....

"Hillary Clinton is a fabulous leader. My husband had a formidable opponent in her in the primaries. She is a phenomenal secretary of State. We have examples of outstanding women like her in leadership all over the world.

(ANALYSIS: 5 things that could go wrong for Obama)

"So it's completely there. The question is, are we ready? Are we, as young women, are we ready to take that responsibility on and go after it and take the risk that go with stepping out there and being judged? And I think sometimes as women we can step back, but we can start pushing ourselves now."

Posting source: http://news.yahoo.com/s/yblog_exclusive/20110526/pl_yblog_exclusive/michelle-obama-on-her-cute-husband-hillary-clinton-and-how-she-raises-her-daughters
Posted by Freelance at 12:47 AM