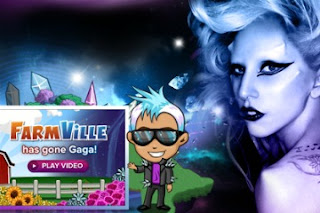 The web is what you make of it,” reads the parting text in Google Chrome‘s latest commercial featuring Lady Gaga.

It’s a simple eight-word slogan for Google’s web browser but it represents so much more when you connect it to Gaga, who took to the web this year to create an inescapable marketing spectacle for her Born This Way album.

In the months leading up to the May 23 album release — and even now — Gaga has paved a path for stars and brands to get inventive with the ways they use digital and social media to promote themselves and connect with fans.

The 25-year-old is no stranger to success on the web. She remains a heavyweight on major social networks: In the past year, Lady Gaga was the first artist to reach 1 billion views on YouTube; she beat President Barack Obama to 10 million Facebook fans (she’s now closing in on 35 million); and most recently, she was first Twitter user to acquire 10 million followers.

The promotional juggernaut further ramped up her all-encompassing web presence, fostering partnerships with Zynga for the FarmVille-inspired GagaVille, Starbucks for a massive scavenger hunt, VEVO for exclusive premieres, HBO for a concert special, Rdio for free lifetime subscriptions, iTunes for a promotional countdown, Best Buy and Livestream for an album signing and Gilt Groupe and Amazon Cloud Player for deals.

“Gaga and her team are some of the best marketers around; they understand the importance of integrating social with traditional media, engaging audiences in real-time, and most of all, telling a story that is relatable and worth spreading,” said Alexa Scordato, a Gaga fan, digital strategist and community manager for MAT@USC.

Even Lady Gaga’s critics have to acknowledge the magnitude of her marketing medley: “I’ll probably get cyber bullied after this from all her Little Monsters, but I’m not a huge Gaga fan,” said Romey Louangvilay, senior account executive of digital and social media at Euro RSCG PR. “With that said, I give her credit for her artistry and marketing genuineness.”

Below, we’ve compiled a huge swathe of the digital and social media initiatives behind Gaga’s Born This Way. Flip through the roundup and then let us know in the comments which tactics you thought were most creative or most ridiculous.