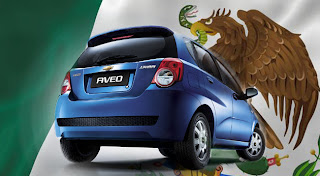 The Chevrolet Aveo, made in Mexico of 2% U.S.-sourced parts, is the least American car from a U.S brand.

It was the most talked about two minutes of television in years; a kind of post-industrial morality play with a thumping soundtrack and a new Chrysler rolling through the gritty streets of Detroit, past vacant factories and shadowy stadiums named for bygone heroes. This, Chrysler brand CEO Olivier Francois told the audience at the 2011 New York International Auto Show, was not just another Super Bowl commercial; this was a car that was proud to be “imported from Detroit.”

It was soul stirring to say the least, backed up with the strains of a live gospel chorus and mind-blowing audio effects. Still, in these times of multinationals and gazillion-dollar bailouts you had to wonder – how American was it?

An interesting question to be sure, and one Chrysler loyalists might find preposterous. After all, Chrysler has been an American institution since 1920; the marque brought us the Hemi engine, the minivan, and interiors swathed in rich Corinthian leather. But that was then. 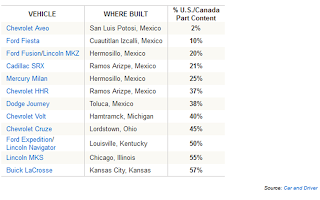 In more recent years industry watchers have seen the line between “American” and “foreign” become increasingly blurred; according to the U.S. government, in order to be labeled “American” and avoid import taxes, a car must contain at least 75% parts made in the United States. Measuring by this yardstick, the Chrysler 300 – for all its gangsta theatrics – isn’t very American at all; it falls short with only 73% American content and so must be considered a foreign car.

Not that there’s anything wrong with that. Some of the most technologically advanced and reliable vehicles on the road are made in plants owned and operated by foreign manufacturers either stateside or overseas. Paradoxically, neither domestic nor foreign carmakers want the public to know just how many – the former because being outsold by imports in their own backyard just looks plain bad for American industry, the latter because foreign automakers fear a protectionist backlash from the public, and Washington. For decades, Detroit’s car-making troika have danced around the question of nationality by referring to "North American" production, which includes Canada and Mexico, where they build approximately one-third of their cars. The snazzy new Chevy Camaro, for instance, is made in Canada, while the popular Ford Fusion sedan is assembled in Mexico. Including Canada and Mexico allows Detroit's Big Three to say they still build the majority of their cars in North America.

The "Made in America" claim is becoming increasingly irrelevant. In recent years, the line between “American” and “foreign” has blurred to the point that in 2010, foreign automakers produced more cars in the U.S. than did Ford, General Motors, and Chrysler combined (the last now controlled by the Italian company Fiat, and whose CEO, a Frenchman, urges “Buy American” in an accent as Gallic as escargot).

he matter of national identity has been muddled ever since 1982 when, in Marysville, Ohio, the Honda Accord became the first Japanese-branded vehicle to be built in the United States. Some competitors and critics labeled Honda's factory a “transplant” built to avoid import tariffs and taxes that might otherwise apply. Nonetheless, the marque has expanded its U.S. operations to the point that 80 percent of the Hondas and Acuras sold in the U.S. are now built here.

Aptly named Fiestas must all cross the border.

Aptly named Fiestas must all cross the border.
The Accord also contains 80% U.S. parts content, which – in the eyes of the Feds – makes it as American as prom night. More so, in fact, than the Chevrolet Cruze, which is composed of a mere 45% American parts content. Likewise, the Mitsubishi Eclipse (coupes and convertibles with 80% U.S. parts) eclipses – no pun intended – both the Ford Expedition and the Lincoln Navigator SUV twins, which, physically speaking, are only half American. The Chevrolet Aveo, by far the least American car to carry an American badge, is made in Mexico, and just 2 percent of its part content comes from the U.S. The average deck of cards contains more jokers.

Ultimately, for all the talk and statistics about place of manufacture and international borders and tax breaks, for the car-buying public, it comes down to one question: what difference does it make?

For a long time, a car’s country of origin made all the difference in the world. Fords and Chevys of the ’60s weren’t just transportation, they were baseball and hot dogs and the Beach Boys. For loyal Englishmen, Aston Martins and Bentleys were on a continuum with the Battle of Britain and stiff upper lips – they were what England was all about. Italians, for their part, saw Ferraris and Alfa Romeos as something transcendent: “The car, she is like a woman.” For Germans the element that defined the post-WWII lifestyle was the Autobahn, where speed limits were more a matter of horsepower and nerve than law.

How could anyone replicate these ineffables in a plant thousands of miles away from home? The Japanese showed how; unencumbered by myth and tradition, it stood to reason that the Japanese would be the first to begin full-scale manufacturing in the States. By 1986, what was once unthinkable – a foreign carmaker manufacturing on US soil – had become a phenomenon, a trend memorialized in the 1986 movie “Gung Ho.” It depicted the conflict of cultures that arose when a Japanese automaker took over a car factory in Pennsylvania; Michael Keaton had to explain American culture to his new Japanese bosses, and vice versa. The stereotypes were familiar: the Japanese were depicted as rigid and team-oriented while the Americans were fun-loving individualists. Nevertheless, it must have hit close to home because Toyota used the movie as a primer on how not to manage Americans. Other Japanese carmakers joining Honda and Toyota in the move to America were Mazda, Mitsubishi, and Subaru, and Suzuki, with the South Koreans – Hyundai and Kia – not far behind.

Presumably another standard applied to more upscale markets; conventional wisdom held that luxury car buyers wouldn’t buy a car made anywhere but its homeland – pedigree was part of the package. The paradigm shifted when, in 1994, BMW began building the 318i sedan in a plant in Spartanburg, South Carolina. This was no mere transplant; rather, says Kenn Sparks, BMW Business Communications Manager, it was a “world plant” intended to build cars for a global market. Since then the Spartanburg factory has become the world’s sole source for the Z4, X5, and X6 models with the X3 soon to come. Meanwhile, Mercedes-Benz followed the Bavarians’ incursion into the States in 1997, and Audi announced tentative plans to begin manufacturing stateside in 2015.

In a sense, the proliferation of foreign-owned plants across America is the law of unintended consequences at work. Originally the transplants were the Japanese carmakers’ response to the jingo-ism of the late 1970s; by opening factories in the states, they reckoned, they could stave off talk of protectionism and mandating American parts in foreign cars. Content laws never got very far, but other reasons for setting up shop in the states became clear. Building cars closer to the consumer produced savings in transportation, labor costs were lower, currency exchange rates were more favorable, and tax breaks abounded.

True, one vestige of protectionism remains – the 1994 American Automobile Labeling Act. This was intended to enable patriotic car buyers to Buy American by displaying the percentage of parts made in the USA.

It may have the opposite effect, though, as numerous foreign cars have higher ratings than their American competitors. What's more shocking is that neither General Motors (69%), nor Ford (64%), nor Chrysler (60%) meet the basic 75% “Made in America” criterion.

If it’s any consolation, neither does any other automaker. With foreign plants proliferating across the U.S., it seems inevitable that European and Asian cars will become more American, and American cars more European or Asian. No doubt this cross-pollination will produce improved cars and trucks, the kind the public wants and needs. It would be nice, too, if sometime in the future, the most popular cars made in America’s plants could be American.

But meanwhile, according to Cars.com's “American Made Index,” they’re Japanese.