Romo gets hitched to beauty queen with Jerry Jones in attendance 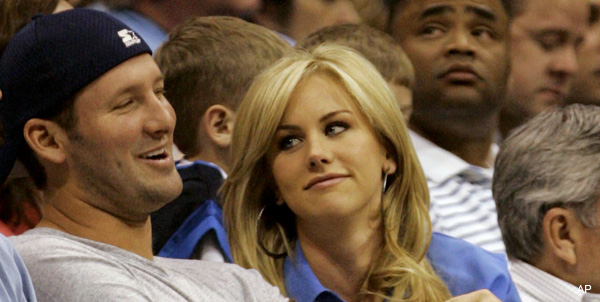 NFC East rival quarterbacks Tony Romo(notes) of the Dallas Cowboys and Eli Manning(notes) of the New York Giants now have something else in common — they've used the same wedding planner to help them tie the knot. Todd Fiscus, the man with the plan, set up what he called "man food" at Dallas' Arlington Hall on Saturday, when Romo married former Miss Missouri Candace Crawford. "I have a lot of football players to feed," said Fiscus, who had pizza and short ribs on the menu.
However, Romo apparently put all the tunes together. "Tony picked out every song, and when it plays, and what the keynote things are," Fiscus said.
Sounds like a very orderly occasion, but there was one wild card — whether Cowboys owner Jerry Jones would be able to attend. With the continued lockout, owners and players are not supposed to have any contact away from the negotiating table. But Jones received special dispensation from the NFL to attend, just as the Green Bay Packers recently were informed that they will, in fact, receive their Super Bowl rings in a June 16 ceremony no matter what the labor situation is at that time. Jones was there along with virtually all of Romo's teammates.
It is unknown whether Jones and Romo actually discussed any labor issues at the wedding — we're guessing this was more of a "friendly", though Jones is one of the most powerful owners on the NFL's side of things and Romo's marquee value gives him a lot of play on the other side.
"I've gotten special permission," Jones recently told ESPN's Ed Werder. "But more than anything, (I got the) right ticket from him and his fianceé — Romo's wife-to-be. (It's) one of prettiest invitations I've ever seen.
"So, yes, I will be there and (I'm) proud for him. He's got the best end of this deal."
Romo, who had been linked romantically before with Jessica Simpson and Carrie Underwood, proposed to Crawford last December. Crawford's brother Chace is known for his role on the TV show "Gossip Girl' and has also been linked romantically with Underwood.
According to the new Mrs. Romo, the lockout may play a part in the couple's plans for a honeymoon; usually around this time of year, her husband would be participating in minicamps and other off-season workouts.

"This lockout has been quite a dent in the honeymoon idea," she told WFAA-TV. "We'll see. We haven't really gotten there yet. We're taking a day at a time with the lockout. We (are not) even sure if we're gonna get to go (on) one."
Posting source: http://sports.yahoo.com/nfl/blog/shutdown_corner/post/Romo-gets-hitched-to-beauty-queen-with-Jerry-Jon?urn=nfl-wp2253
Posted by Freelance at 1:55 AM