Plugged In for Champions League Final 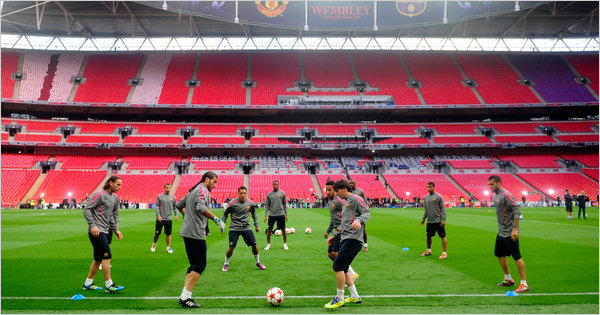 Manu Fernandez/Associated Press
Lionel Messi, at center in foreground, and his Barcelona teammates during a training session Friday at Wembley Stadium
By GEORGE VECSEY
Published: May 28, 2011


The Champions League final Saturday in London brought together Manchester United’s fiery striker Wayne Rooney, pictured, and Messi.
Soccer has made such a huge leap to the United States in the past decade or so, via the Web and the tube, that the physical presence of the best players in the world on American soil has became a ritual — no matter the strain on the players.
Many of the stars who were likely to play 90 minutes or more in the Champions League final in London on Saturday night are going to take their bruised and battered bodies across the ocean in the very near future.
As many as six Barcelona players will be ferried across with the 2010 World Cup champions, Spain, to take part in a friendly against United States on Saturday in Foxborough, Mass. And most of the Manchester United players will be rounded up and shipped to the Major League Soccer All-Star Game on July 27 at Red Bull Arena in Harrison, N.J.
But first, the lads had to play the prime-time Champions League spectacle at Wembley, presumably matching the brilliant Lionel Messi of Barcelona against the fiery Wayne Rooney of Manchester United.
The finale of the European club season has become a staple on television all over the world, including in America. Until last year, it was a Wednesday afternoon delight, enticing workers into extremely long lunch hours in pubs all over the land. In 2010, the Champions League final was switched to Saturday, to draw bigger audiences and provide a more elongated Super Bowl buildup in major European host cities.
Because of the electronic surge on Web sites, and the business acumen of good old Fox and good old ESPN, soccer has become a mainstay in the United States — now on the Memorial Day weekend, once the province of the Indy 500 and baseball doubleheaders, both now severely downgraded.
But along with discovering this creative and fast-moving sport, Americans have also come to realize the grubby cynicism of world soccer.
Only last December, Americans watched Russia and Qatar emerge as hosts of the 2018 and 2022 World Cups, after extremely suspicious vote-trading patterns. Since then, the perpetrators have turned on each other. As the world soccer body, FIFA, prepares to vote for its president on June 1, the 12-year incumbent, Sepp Blatter, is hurling charges of corruption at his challenger, Mohamed bin Hammam of Qatar. Blatter is painting himself as Fighting Sepp, the People’s Choice, as he supported the charges against bin Hammam leveled by Chuck Blazer, an executive board member from the United States.
On Friday, Blatter was summoned to a board hearing Sunday to explain allegations against him from bin Hammam. The vote for president — and the awarding of the 2018 and 2022 World Cups — could be thrown in disarray.
On Friday, Blatter was summoned to a board hearing Sunday to explain allegations against him from bin Hammam, and he was not expected to attend the final in London, a sure sign that this hearing is indeed serious business. The vote for president — and the awarding of the 2018 and 2022 World Cups — could be thrown in disarray.
The charges and countercharges make machinations of the Olympic movement and American professional leagues seem like sandbox squabbles. Watching the charges of deals and payoffs in world soccer, Americans can feel like the naïve young cyclist in the classic movie “Breaking Away,” who wants to participate in the world sport, only to have a more seasoned Italian cyclist stick a pump in his spokes.
Americans may be innocents, but at least we have discovered the angst of the World Cup — yuppies second-guessing homegrown national coaches in Midtown cafes every four years — and the joys of the Champions League. Who can forget some of the recent finals — the stunning three-goal comeback by Liverpool against A.C. Milan in Istanbul in 2005, leading to a Liverpool triumph in the dreaded penalty kicks? And what about the gallant comeback by Manchester United against Bayern Munich in 1999 in Amsterdam? My friend Massimo Lopes Pegna of La Gazzetta dello Sport and I had to talk a few distraught German fans out of hurling themselves under the crosstown bus outside the late and lamented L’angolo in Greenwich Village. Big-time worldly soccer despair, right here in America.
In the past decade, the Champions League has more or less doubled the pressure on psyche and soma of the best players in the world, who often play twice a week from August into May, not counting lucrative exhibition runs to faraway places in the alleged summer vacation. In the search of Yankee greenbacks, it has become de rigueur to scoop up the usual Euro suspects and make them work in the States.
In 2001, Bayern played 120 minutes in Milan and beat Valencia on penalty kicks, then flew back to Germany before materializing in New Jersey, six time zones away, for a friendly. The roster contained a few names previously unknown — trainers, water boys, publicity agents, maybe even volunteers off the Munich streets, just enough actual soccer players to fulfill the contract.
Who knows if the flashing feet and nimble minds of Spain will actually make it to Massachusetts, but it would be great to see David Villa, Pedro, Sergio Busquets, Victor Valdés and Gerard Piqué, and the silky-smooth Andrés Iniesta, doing their thing for Spain, as they did last year in South Africa. The colonies do not necessarily see the world’s best players, at their freshest, in person. But through the miracle of electronics, we see them all season, that is to say, virtually year-round. What a wonderful age we live in.
E-mail: geovec@nytimes.com

A version of this article appeared in print on May 29, 2011, on page SP7 of the New York edition with the headline: Plugged Into the Global Village.

Posted by Freelance at 8:23 AM