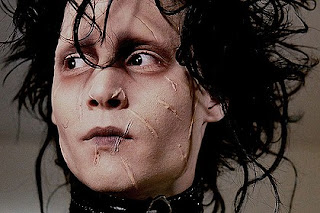 Johnny Depp is back in the scarves, jewels and eyeliner, bumbling his way from one adventure to the next as the insouciant Captain Jack Sparrow in Pirates of the Caribbean: On Stranger Tides. It's the fourth movie in the monstrously popular Disney franchise and it's given Depp one of his signature characters.

But the 47-year-old actor and three-time Oscar nominee is one of the most versatile performers of his generation, immersing himself fully and believably in every role he takes. So here's a look at Depp's five best performances - although it would have been hard to choose the five best from the work he's done with Tim Burton alone:

The first of Depp's collaborations with Burton, who would go on to become his frequent director and good friend. The seeds were planted here for one of Depp's key on-screen personalities: the quirky-funny-awkward-sweet misfit. He's all that and so much more as the title character, the creation of an inventor who died before his work was complete, leaving Edward to fend for himself in the outside world with scissors for hands. He's initially feared, but then his gentle demeanour wins over the bored residents of a tacky suburban enclave, including the beautiful teenager Kim (Winona Ryder). It's a whimsical and dark fairytale, and Depp's delicate performance is just heartbreaking. I cry every time I watch it.

Depp's next film with Burton was the hilarious, sorta-true, black-and-white biopic about the director Ed Wood, who achieved cult status by infamously making some of the worst films known to mankind, including Plan 9 From Outer Space and Glen or Glenda. Depp infused the performance with the clueless, cheery optimism of a would-be auteur. But in portraying Wood's secret, inner life - his proclivity for dressing in women's clothing - he also found a sweetness and a sensitivity. You get the feeling that Depp (and Burton) were never making fun of Wood, but rather saluting him with an affectionate homage.

The first time he played the role of Captain Jack Sparrow, it was a startling thing to behold. He seemed kinda drunk and vaguely effeminate, out of control yet always on top of his game. Depp was clearly channelling Keith Richards (who would show up in later instalments in a cameo as Jack's dad), and yet he had created an indelible figure that was entirely his own. It was unpredictable, and that was thrilling. The first Pirates movie earned Depp the first of his three best-actor nominations. Now the novelty has long since worn off, but Jack can still be a kick.

Back with Burton, Depp earned his third best-actor Oscar nomination for playing the title character in this film adaptation of Stephen Sondheim's revered musical. He and co-star Helena Bonham Carter aren't exactly singing - they're really acting the music most of the time - but that makes the whole experience feel even more frightening. Still, in playing a vengeful barber who slits his customers' throats, Depp took on the kind of challenging role that's become his trademark; he can do anything, and he makes it look easy. With his shock of black-and-white hair and an obsessed look in his darkened eyes, Depp's Todd could be a long-lost, evil relative of Edward Scissorhands.

These animated films reveal Depp's ability to provide a rich characterisation, even when you can't see him. In Rango, he lends his voice as a quick-talking lizard with a flair for the theatrical. Dumped in the tiny desert town of Dirt, this domesticated pet reinvents himself as Rango, and he's one tough hombre. Depp is wonderfully goofy here; he sounds playful and free. In the gorgeous and strange Corpse Bride, a wonder of stop-motion animation and digital technology, Depp dials it down to play a young man who's shy, skittish and subdued, but just as fully fleshed out as any human being he's portrayed throughout his varied career.

Posting source: http://www.smh.com.au/entertainment/movies/johnny-depps-most-memorable-performances-20110520-1evvz.html
Posted by Freelance at 5:51 AM