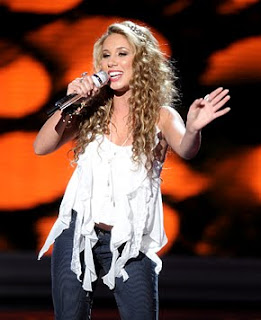 After a record 95 million votes were cast during this week's top 3 round, Reinhart, 20, was eliminated Thursday, leaving Scotty McCreery and Lauren Alaina to compete in next Wednesday's finale.

Despite taking a nasty fall during one of her final performances on the Idol stage Wednesday, Reinhart -- often the focus of negative judge criticism -- received high marks from Jennifer Lopez, Randy Jackson, Steven Tyler and guest mentor Beyonce.

"She has conviction and makes you believe in what she's singing," Beyonce gushed during her rehearsal session with Reinhart. "That's a big part of being a superstar. Haley's a rockstar [and she's] incredible."

Though she fell just short of the season 10 title, the Wheeling, Ill. singer -- whose hometown visit was chronicled on Thursday's show -- is grateful for her Idol experience.

"This is the biggest platform anybody can ask for and I rocked it out and had a blast," Reinhart, who offered Elton John's "Bennie and the Jets" as her exit song, told fans after getting the boot. "It's only the beginning."

As McCreery, 17, and Alaina, 16, become the youngest finalists to compete for the title in Idol history, tell Us: Who are you rooting for?

By Allison Corneau for UsMagazine.com.

Posting source: http://www.usmagazine.com/moviestvmusic/news/haley-reinhart-booted-from-idol-days-before-finale-2011205
Posted by Freelance at 6:11 AM